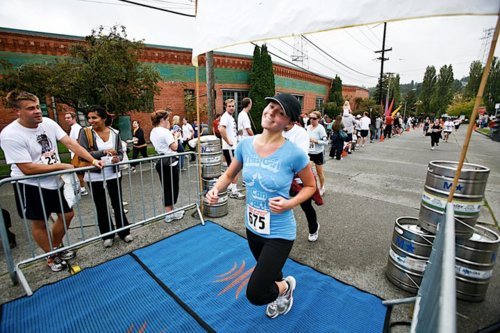 GPOYW: “Crossing the finish line of my first 5K” edition.

I ran it in 33:32 and was dying at the end. Not sure how I managed to look so nice and carefree! Probably because of all the adrenaline that instantly got me hooked on racing.

Yes, my t-shirt says, “This Girl Can Party!”

The Valentine’s Day Dash 5K is in the books! Aaron and I both scored PRs:

We both felt nervous beforehand because we both wanted to improve our PRs. The course around Green Lake is almost entirely flat, so we knew we could do well if we ran smart. Luckily, my nervousness died as soon as we headed to Green Lake. The weather was great — cool, but not cold, and partly cloudy, but not raining — so I was psyched that we wouldn’t be running in the rain like I thought.

Once we got to the starting area, Aaron lined up with the super-fast people in the 6:00-7:00 pace group, and I hung out with my 8:00-9:00 homies. I usually start farther back, which is why I tend to have trouble passing slower people, but this time I actually started where I belonged and had a great beginning to the race.

I felt awesome for the first mile! I took it easy at about a 9:15 pace and just enjoyed running. I stayed to the inside of the course and didn’t weave around people. I kept looking for the one-mile marker but never saw it, then realized I must have missed it after seeing that more than 10 minutes had gone by on my watch. The two-mile marker came up before I knew it, and I looked down at my watch and realized I was on track to beat my goal!

My stomach started to hurt around this point since I was going a bit faster (trying to stay under 9:00 pace). I really didn’t want to take any walking breaks, but I did once I convinced myself that I could walk briefly and still beat my goal time. I walked two or three times to try to relieve my crampy stomach. Finally, I realized the end was so near and just poured on the gas.

I fully sprinted the last 0.1 mile and seemed to be the only person doing that, so I had to weave through other runners. I heard Aaron yell encouragement to me and I finished strong, then promptly found a curb to sit on. The curb of life! Aaron brought me a bottle of water and all was well. I never even had any ankle, shin or knee pain like I did during the last bit of training!

We then pillaged the food booths big time.

It’s now raining intensely in Seattle — thank goodness we had a great race before the downpour! Yay for Valentine’s Day PRs!

There’s an optional “polar bear dive” portion of the race. I’m obviously doing it. I mean, completely submerge myself in Lake Washington in the middle of what’s supposed to be a wickedly cold and harsh winter? Duh.

From the Web site: “Participants in this 3.1 mile run/walk can choose to stay dry and compete in the standard 5K run/walk or they can choose to select the optional Polar Bear Dive 5K that takes a brief detour into Lake Washington roughly 100 yards before the 5K finish line. Results for the standard 5K and the Polar Bear 5K will be scored separately. Roughly 60% of the 1,780+ race registrants last year chose the Polar Bear Dive option.”

Once upon a time (like a few months ago), I would’ve been too chickenshit to do something like this. Maybe I would have done the run, but definitely not the polar bear part. Now I’m just freakishly excited about it. Huh.

I’ll be running/diving with my race partner, Aaron, who doesn’t exactly enjoy being cold, yet didn’t hesitate when I asked him to do this with me. Such a badass.

With this 5K, the half marathon and so much else to look forward to in the next year, I can safely say that 2011 is going to be awesome!!

Photos courtesy of my friend/photographer extraordinaire, Aaron. Yes, I look like a complete idiot in the first one, but I have never, ever, ever been so happy to cross a finish line. Ever. In my whole, long three-month history of racing. It felt like a miracle.

And then it started to snow. Miracle status!

Oh, so much to tell about this cruise!!!

The running-related part: I hit the fitness center twice.

(I was rockin’ no sleep after a red-eye flight, but really needed to move after being cooped up on two planes, a taxi and in a waiting area to board the ship.)

(Running while the ship was moving was super, super, super difficult. I believe I had also consumed a drink containing vodka prior to this run, so that could have also contributed. Still, felt good.)

Epic travel day home yesterday. Flew to Chicago, got delayed a bit, then flew to Seattle. I discovered that I can’t sleep on planes.

Ran the Green Lake Gobble 5K this morning in freezing weather — literally 32 degrees, since it started SNOWING shortly after I finished the race — which was a bit of a shock after a week of 80+ degree weather and epic sunshine. But about a half-mile in, I got this wave of intense happiness and realized that there was nothing I would rather be doing.

lt was a pretty cool feeling to have this complete contentment and realization that I. Love. Running.

I felt a bit out of shape and had to walk a few times, despite the course being mostly flat. Still, squeaked out a new PR — 28:51.

Pictures to come soon! My photographer-friend, Aaron, came to show his support and take pics with his super-nice camera. He got some good ones. They’ll be Tumbld asap.

Is “new PR” redundant? Meh, don’t care. Off to get some much-needed sleep!!

Watched an awesome documentary this weekend about ultramarathoner Dean Karnazes, who ran 50 marathons in 50 states in 50 days back in 2006. Incredible and inspiring, to say the least! I definitely want to work up to a marathon… perhaps in 2012?

Meanwhile, I’ve already decided on my next race: the Green Lake Gobble 5K in Seattle on Nov. 21. It’ll be a completely flat course, so I should be able to significantly improve my time. However…

…it is the morning after my return home from a seven-day Caribbean vacation, during which I plan to have a margarita in my hand at all times. Perhaps I can get some running in, too. We shall see.

Therefore, my conservative goal for the Gobble (ha) is sub-28:30.

I made this playlist exactly 30 minutes long. Big time.

The first two are the same as my Dawg Dash playlist simply because they’re so freakin’ good for getting me pumped up and feeling great.

Note the subtle difference between shit and the shit.

And Linkin Park returns to cap off the race. It should do for me what the ringing bell did for Pavlov’s dogs, except instead of salivating, I’ll start running really, really fast.

I’m obsessed with Ben Does Life, as is my mom. Ben has definitely inspired me to get more serious about running (as in going from not serious at all to, “Hey, maybe I could actually be good at this if I really try”) and I’ll make it no secret that this blog is modeled after his.

What he posted this morning is so incredibly true that it made me laugh out loud.

A very popular concern from readers I get via email goes like this:

It’s either because they are overweight and embarrassed to be seen at the races or they perceive themselves to be slow and are embarrassed.

I want to set the record straight here once and for all:

No one is judging or making fun of you.

More likely, you are inspiring someone or making spectators wish they were out there racing.

You are not too *anything* to be out there racing. And I suspect if you do try it, you will become an addict. There is something magical about a race that you can’t get from your regular, everyday running. You will finish the race and schedule your next one within a few hours (after the most glorious nap you’ve ever had… seriously, post-race naps are worth the entry-fee alone).

What did I do after the 5K yesterday? I took an epic nap. Then I scheduled my next 5K.

But seriously, I was a bit freaked out before my first 5K last month because I’m not a “serious” runner. I felt like I didn’t really belong in the race and that everyone would know it.

Once I got there, though, I realized that the race was filled with people of all different ages and abilities. There were serious runners, for sure, knocking out 5- and 6-minute miles and going for PRs. But there were also a whole bunch of people just there for the fun of it, and everyone did the best they could. No one judged. Everyone focused on his or her own race.

That’s what I like about running, at least the kind of running I’m doing: I’m not competing against anyone but myself, and I’ve found that I’m a worthy opponent.