I’m still a bit bummed about this race, which is probably why I’ve waited a week and a day to write the recap.

2. The course was about a quarter-mile short, so I don’t count my PR as a PR.

Aaron and I arrived at Marymoor Park wayyy early — 6:15, even though the race started at 7:30 — because traffic was such a cluster last year. We had no trouble this year, and even caught an incredible sunrise as I picked up my packet.

No filter. It really was that beautiful!

We had a ton of time to kill, so we sat in the car to stay warm until 7:25-ish. I didn’t stretch or warm up at all. I probably should have.

My dad found us right before the race started, so we snapped a pic. Most loyal race spectator ever! 🙂

Aaaaand it was cold. Should have warmed up.

My goal was to start out slow and steady (8:45 pace or so), and then start picking it up after the first six miles.

I had trouble getting into a good rhythm, but I felt confident that I was going slowly enough, and I was. I ran the first mile in 8:54.

The problem was that I hit the one-mile marker when my watch only read 0.90 mile. Hmmm. Maybe this discrepancy would even itself out over the rest of the course?

But no. Each mile, I consistently passed the mile marker when my watch read only 1.90 miles, 2.90 miles, etc. Very odd.

My slow-and-steady plan was going well, though. I ate my first gel at mile 4.5.

And then every runner’s worst nightmare hit me: the dreaded SIDE STITCH. Nooooo!!!

I very, very rarely get side stitches on training runs, and when I do, I try to run through them as if I’m in a race and can’t stop. Often I can really focus on deep breathing and run through them. Other times — including this time — I can’t get rid of it and have to walk.

I pulled off to the side of the course and walked for 40-45 seconds. I was SO MAD. I’m ashamed to admit I had a horrible attitude about it and just wanted to quit right there. I was NOT enjoying the race and I probably wasn’t going to PR, so why bother running the rest of it?

I had just started running again when I saw my dad along the course, cheering and taking pictures. I couldn’t even muster up a smile; I just yelled out that I had a really bad cramp and was hurting.

It would have been so easy to stop running and get into my dad’s car. For a quarter-mile after I passed him, I considered turning around and doing just that. But the side stitch faded away bit by bit, and I resolved to finish the race just to prove to myself that I could.

I wanted to pick up my pace after mile six to make up for the walking and to negative-split the race, but (a) I was afraid I would get another side stitch, and (b) my legs were just not feeling it.

So frustrating. I ate another gel at mile nine.

Around the beginning of mile 10, the course went from gravel path to paved trail, and then to concrete sidewalk. I can always run faster on hard surfaces, so I gritted my teeth and tried to fly.

The course was still measuring short compared to my Garmin, but at this point I was actually HAPPY about that since it meant I would finish sooner! Somewhere in the last mile of the race, the course lost even more mileage, and I crossed the finish line having run only 12.86 miles.

But I was still VERY HAPPY to have finished! (That little blond tot holding the yellow sign just kills me. So cute.)

My official time was 1:52:03, but I won’t count it as a PR since the course was nearly a quarter-mile short. It wasn’t just me…

Buuuuut whatever. I’ll PR a half marathon another day… maybe. I’m still not a huge fan of the distance. I love 15Ks and I love marathons, but there’s something about the half that I don’t enjoy that much.

Or maybe I’m just still grumpy about this one. 🙂

After the race, I ran into my college friend Moorea, who killed it in 1:48! She was just trying to break two hours so, short course or not, she nailed a huge PR!

My dad, Aaron, and I went to Panera for lunch afterward, and I enjoyed my standard post-race meal of tomato soup in a sourdough bread bowl and salad. Yum.

The next day, my legs weren’t sore in the slightest. Weird, but a sign that I didn’t push myself as hard as I could or should have?

Perhaps I did my long runs too fast and just ran out of juice for the race itself. I’ll be sure to return to slow long running for marathon training, which seemed to work really well for my sub-four finish in Chicago!

Speaking of marathon training, it starts on March 24! I’ve put together my 18-week plan for the Eugene Marathon and am excited to get started.

I was completely lazy this past week and did only a four-mile run on Tuesday. Aaron and I have started watching House of Cards, which is so awesome and addictive! I’ll get back to running tomorrow, and just do easy, fun runs for my last week of freedom until the end of July.

My Garmin also said I only ran 12.86 miles, though, sooo I’m not sure if the course was short or what!

I’ll count it as a PR anyway? Maybe?

I got a horrible cramp just before mile 6 that forced me to walk for about 45 seconds, and I REALLY didn’t feel like running 7 more miles, so I’m just glad I finished – short course or not!!!

It’s a beautiful day for a half marathon! #nofilter (at Marymoor Park)

I figured I should do a quick catch-up post before tomorrow’s half marathon! I’m currently drinking tri-berry Nuun to hydrate (that is, eh-hem, rehydrate after the glass of red wine I just had at happy hour with Karen).

Let’s back up to last Saturday. If you follow me on Instagram, you already know I BOUGHT MY WEDDING DRESS!!! The bridal shop congratulated me with a cute card and everything. 🙂 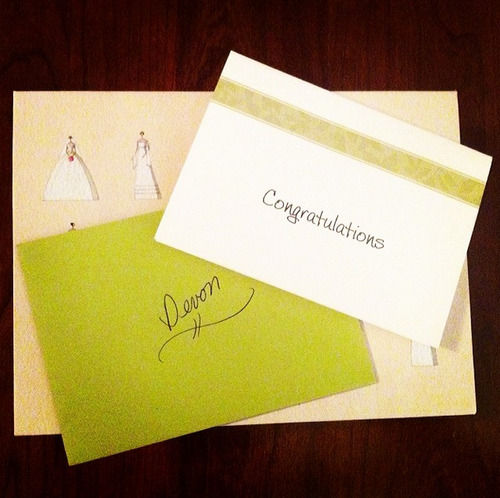 After four months, 10 bridal shops, and quite possibly more than 100 dresses, I finally found the PERFECT one and I’m so glad I held out for it! Now I can picture exactly what our wedding day will look like, and I tear up every time.

OK, on to Sunday’s long run. I ran 12 rainy, windy, incredibly miserable miles along the half-marathon course. It was NOT FUN. 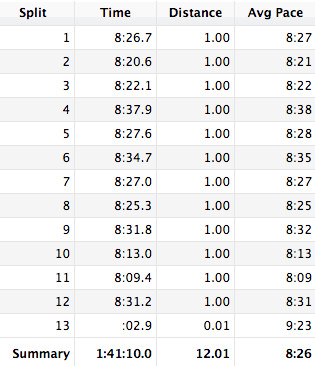 I’ve completely lost the ability to pace myself (THANKS, gym treadmill), so I started too fast and was pretty tired midway through this run. The headwind all the way back to my car was rough, too. Here’s hoping the weather cooperates tomorrow!

Goals for the race:

I’m wary of really getting my hopes up for a PR (sub-1:55) since I crashed and burned so hard in my last half marathon, but I think my training went really well and I have it in me to PR if I pace myself well.

Which is precisely what I’ve been sucking at.