Look what I gots!

The floor is underrated.

Tough 7-mile run with my friend Carly this morning to cap off the running portion of Week 1 of marathon training (16 mi total).

I felt kinda weak. I think I’m not eating enough to keep up with my training, which is a problem I’ll HAPPILY fix.

As soon as I get off the floor. Mmm, so comfy.

P.S. Check out the SWEET sock tan I have, particularly on my left ankle. Word.

Him: Have a good weekend! Running any races?

Me: Nope, but I just started marathon training, so I am running tomorrow morning.

(Is that not the highest compliment a runner can receive?)

Some pictures from last Saturday’s 8-mile run popped up on Facebook. 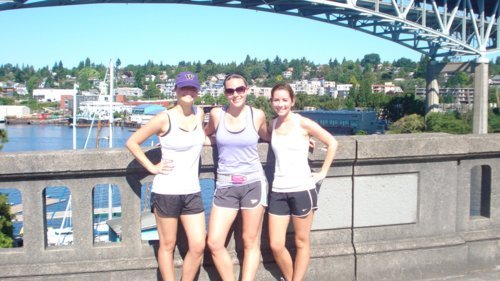 My friend of 10+ years Carly, me, Carly’s friend Jessica (visiting from Portland). 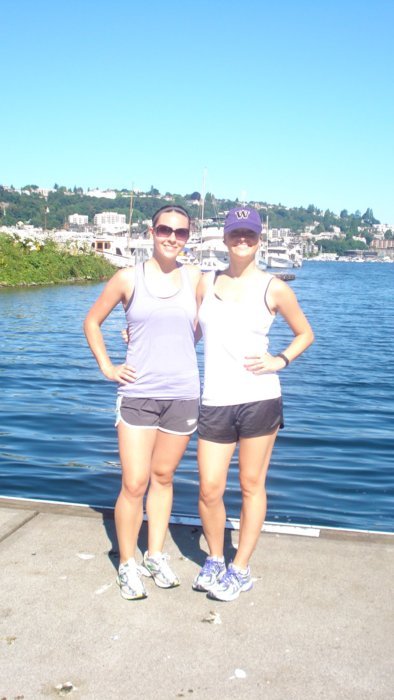 It was such a gorgeous, sunny morning to run around Lake Union! I’m hoping for more lovely weather for my long run this Saturday (7 miles).

I’m not normally a super-social runner, but I enjoyed being able to chat and gossip with these gals for a change. Carly is also doing the Labor Day Half, so I’m hoping she’ll do some long runs with me! We’re both aiming for a sub-two-hour finish (her last half was about 2:05).

And yes, I acknowledge how spoiled I am with delicious running scenery all around me. Love it.

It was great to run another 5K with Ben, Pa and co. in Seattle last night!

When they came to town back in March, I “ran” (walked) with a big, heavy camera and took lots of pictures and made this video, but this time I actually wanted to run! After all, I had 3 miles on the ol’ marathon training schedule, and it worked out perfectly.

This is my way of saying, “Please excuse the poor-quality photos you’re about to see.” 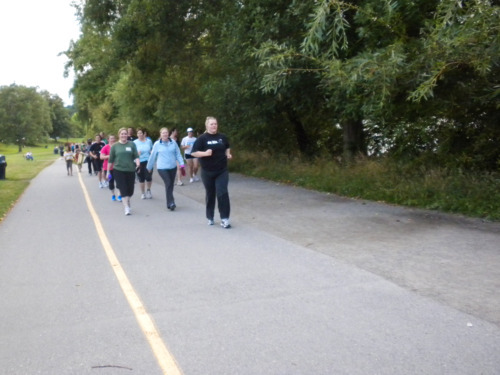 I ran with Courtney, who I met at the last meetup, and we did our 5K in just about 31 minutes while chatting and catching up. She’s done three half-marathons since I saw her last!

We found dinner at the Whole Foods hot bar and salad bar. Yummm. 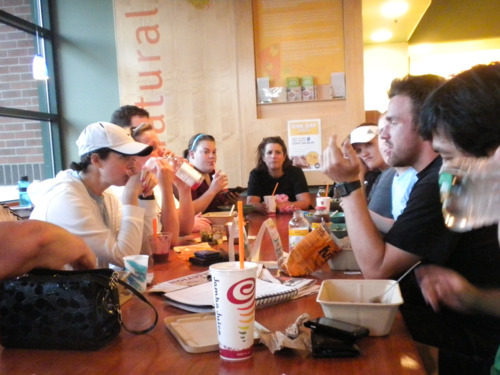 Aaron made an appearance and represented for the hipsters of Seattle with his cute glasses that I love. 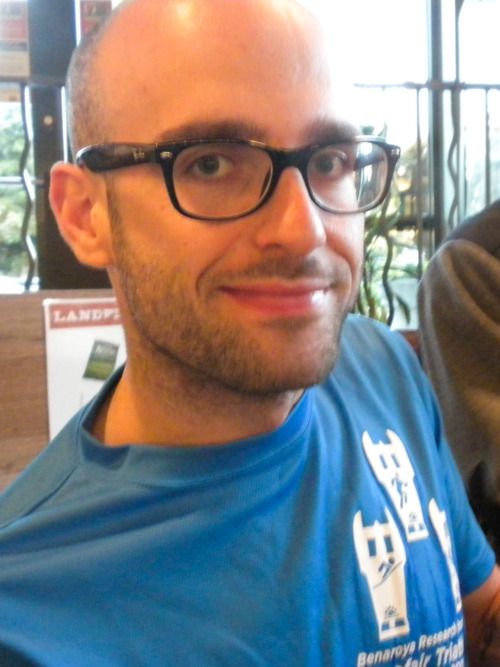 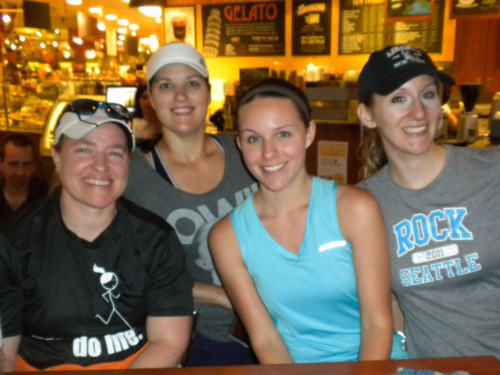 From left: irondoeslife, therevickigoesagain, me and Courtney. (Courtney, please start posting on your Tumblr. Thank you.)

It was a great evening! Huge congrats to Ben and Pa for completing the epic Do Life tour, and good luck with Vineman on Saturday!

The sun is coming out (EDIT: kind of) just in time for the Do Life 5K in Seattle!

I’m excited to meet some new friends and catch up with the ones I met nearly four months ago at the last meetup.

I know a lot has changed for many of us since then. If you catch my little part in the video Aaron and I made, I said I wanted to run a 10K, a 15K, a half-marathon and a marathon this year. Hey, I’ve done three of those so far! And I’m now working on the fourth.

Unfortunately, Aaron isn’t feeling well (and is in fact at the doctor right now), so he won’t be at the meetup. Bummersauce!

I’ll see you guys in a few hours.

I kicked off MARATHON training on Monday evening with a nice 3-miler! Last night, I did Jillian Michaels’ “No More Trouble Zones” DVD for strength-training since I was too lazy to go to the gym.

You can do the clicking thing here to see my whole 19-week training plan, which I based on Hal Higdon’s Novice 1 marathon training plan.

I had to tweak a few things since I’m running my second half-marathon (!) during Week 7 and going on two trips during the training cycle (Vancouver, B.C., and NYC, woo-hoo!).

I really want to keep up with strength-training twice a week and actually cross-train on Sundays — I did NOT cross-train at all during half-marathon training.

I expressed interest in buying a road bike and possibly-maybe-kinda training for a triathlon as well (!!!), and Aaron’s response was this:

“Great! I can run with you and you can bike with me! And then we’ll both drown.”

We were up at 4 a.m. on Sunday, July 24, to get ready for Aaron’s first triathlon — the Seafair Sprint Triathlon at Seward Park.

Aaron signed up for it five days before race day and didn’t train at all. Of course, he had the bike training under his belt (remember that 204-mile bike ride he did two weeks ago?), but he hadn’t done any swimming since our trip to Hawaii in February, and he certainly didn’t prepare for the transitions between each sport.

Oh, and don’t forget he still has that broken hand!

I knew he could do the race, and probably do freakishly well with practically no training; it was just a matter of how much it would hurt to do it… 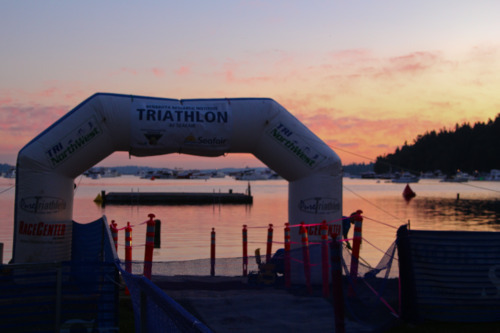 We got to Seward Park just after 5 a.m. It was going to be a gorgeous Seattle day!

Aaron racked his bike and set up all his gear for the two transitions — from swim to bike and from bike to run.

Then, all we could do was wait! There were both Olympic- and sprint-distance races, and all the Olympic participants started first around 6:30. Wave after wave of athletes began to attack the swim course while Aaron waited, cold and anxious.

He had a sweatshirt and sweatpants, but he insisted on getting acclimated to the cold since he didn’t have a wetsuit to wear for the swim. I’d say 95% or more of the athletes wore a wetsuit, but Aaron rolled just a tri top and tri shorts for his first race!

He finally got in the water around 7:30, and he says it was the coldest he’s ever been — even colder than the polar-bear dive we did in January!

Can you spot him? 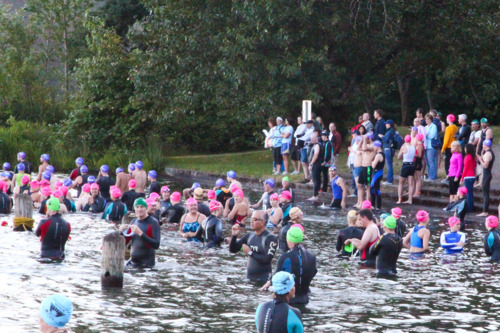 At 7:45, his wave was off! I was dying of nervousness for him the whole time. The swim course was a half-mile, but it looked really, really far to me. 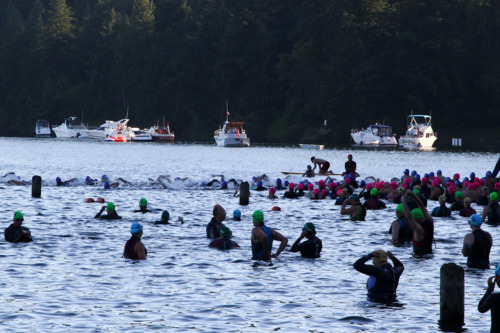 Aaron says the swim was really tough, and he thought he was going to drown. Seriously! He was exhausted and resorted to floating on his back, as well as trying every stroke imaginable to get through the water.

The first thing he said when he got out of the water was, “I guess I should have swam at least once before this!” 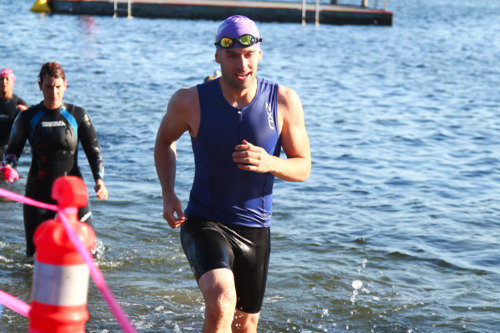 (I think he finished way faster than I would if I attempted this right now! I’d still be in that water as we speak…)

He then ran over to the transition area to get ready for the bike ride. 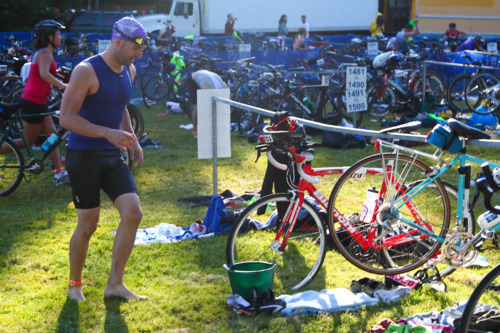 Swim cap and goggles off; socks, bike shoes, sunglasses and helmet on. Plus, he ate some Shot Bloks for fuel. 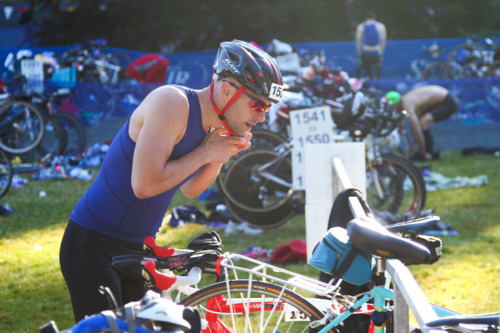 And then he was off for the 12-mile ride down Lake Washington Boulevard, across I-90 and back.

About halfway through the ride, Aaron realized his back brake was jammed on, making the ride more difficult than it should have been! He fixed it and was able to whiz through the second half of the ride much faster. 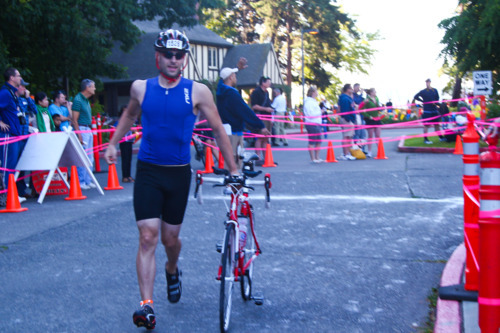 The bike-dismount area had a really sharp corner that caused many athletes to stumble and/or crash into one another as they scrambled to get into the transition area, but Aaron did just fine with it!

It was time to get ready for the last leg — the 5K run. 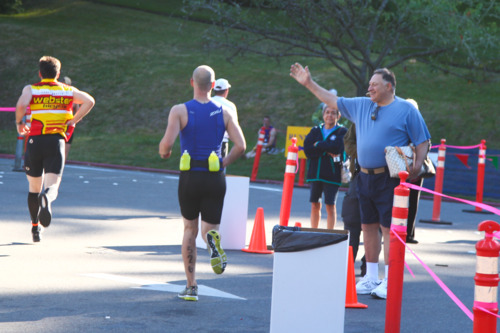 The sun was fully out and it was starting to get warm at this point, so I worried that he’d get really hot on top of being exhausted from the swim and bike. But I also knew that he’s strong with 5Ks, and I knew he’d do well!

I was so anxious waiting for him at the finish line. I had a great time clapping and cheering for all the other athletes as I waited. I’m so amazed at all the effort it takes to do a triathlon!!

Finally, there he was! 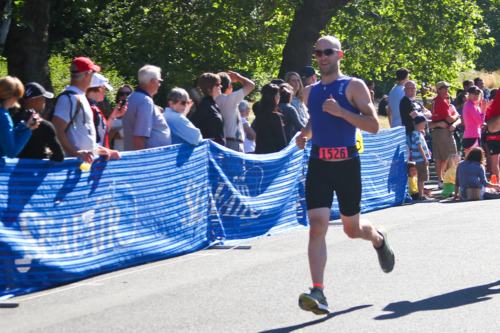 I went nuts as he ran strong across the finish line.

What does one do right after finishing his first triathlon? Go straight for the food, of course.

He looks like he’s giving someone a suspicious side-eye, but he’s really in the middle of chewing the whole bagel that he shoved into his mouth. 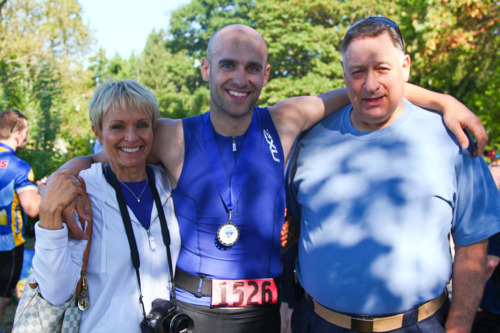 Greta and Mark are so proud of their triathlete!!

And this girl is, too.

I stole this pic off of Aaron’s mom’s Facebook.