First up, we have this news of an attempted abduction on Sunday night:

“The woman was walking in the 8500 block of Fremont Avenue North just before 8 p.m. when a male jumped out of a van and pulled the woman inside.

"The woman fought the suspect and was able to free herself before the suspect could drive off with her inside the vehicle.”

This did not happen in my exact neighborhood, but close enough to scare the hell out of me! Plus, I doubt kidnappers in white vans stick to strict neighborhood boundaries. Those creepers are still on the loose.

AND THEN! THIS MORNING:

“A woman out jogging near Seattle’s Green Lake was grabbed by a man Monday morning, but a bicyclist chased the attacker away.

"It happened around 6:30 a.m. on the outer Green Lake Trail near Green Lake Drive and Wallingford Avenue.

"Police say the woman heard someone coming up behind her that she thought was another jogger. The man grabbed her and pulled her into the trees. The woman screamed and was able to fight the man.

"A bicyclist heard the woman screaming and chased the man away.”

WHAT IN THE ACTUAL FUCK. Thank you for ruining my favorite running route, creeper.

Aaron is going to accompany me on my run tonight and, starting Wednesday, I’m going to run during my lunch break in broad daylight until it gets light enough that I feel safe running after work again.

I get super-sweaty when I run, so it’ll be interesting trying to rinse off/figure out what to do with my hair and makeup at work post-run (we do have showers in the building, but I’m not exactly fast at showering and getting ready).

It’s better to be a little awkward-looking at work than dead in a van or a bush, though (UNDERSTATEMENT).

Anyway. Thank God both of those women were able to fight off their attackers. I hate to think of what those headlines would say otherwise.

“Police say at about 7 p.m., the victim was walking home from the Northgate Mall area when she was jumped by an unknown male and pulled into a weeded area. The victim fought with the man as he sexually assaulted her.”

I actually have no words. 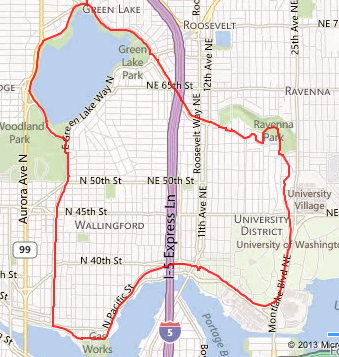 I liked the change of scenery — it was particularly fun to run around my alma mater, the University of Washington — but I didn’t like having to cross so many streets, watch for cars, wait at stoplights, etc.

Green Lake has made me soft. I’ll just have to get used to it again; my runs just get longer and longer when marathon training starts, and I’m definitely not going to run in 2.8-mile circles for 20 miles.

I ran 10.5 miles today rather than 10, since I cut a half-mile from Monday’s run to make sure I got home in time for the TV crack that is The Bachelor. 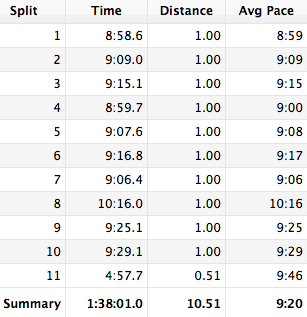 I sipped Nuun throughout the run and ate a chocolate Clif Shot at mile 5.5. I felt great except during mile 8, when I shuffle-ran up Ravenna — a big bitch of a hill.

Sometimes my stomach feels off after long runs, but today I had nooooo trouble plowing through a banana, my leftovers from dinner last night, and a bunch of chips and salsa. Yum yum yum.

Let’s talk about dinner last night. Aaron and I went to Local 360, a lovely restaurant in Belltown that sources most of its ingredients within 360 miles of Seattle. Aaron’s mom gave us a gift card (thank you, Greta!!), so we went a little cray last night (most of the damage was documented on Instagram).

The highlight for me was my entree: beef shortrib with roasted potatoes and yellow and purple carrots, all smothered in béarnaise sauce. 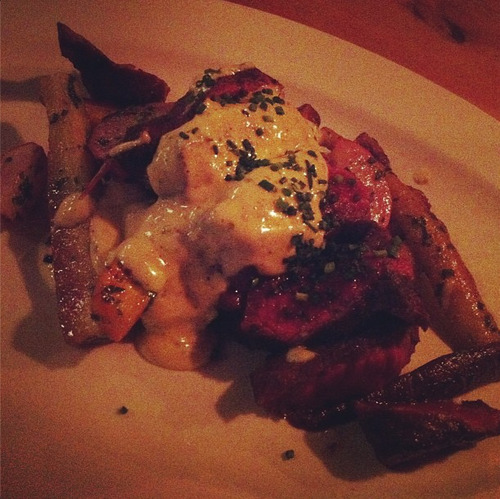 The shortrib was a little too rare for my liking (I was kind of scared), but all the flavors were awesome. I saved half of it and microwaved the crap out of it post-run and it was amaaaaaazing.

I think it’s safe to say I’ve replenished all the calories I burned, and it was a joy and a pleasure.

Rest days are usually boring, meaning I have nothing to post about, but today I have lots to share!

1. I officially registered for the Lake Sammamish Half-Marathon on March 9. It’s a “flat and fast” course that is “perfect for a personal best,” so I’ll aim for sub-1:59!

Fun fact: The race directors are a married couple named Roger and Yumay, and they also organize a bunch of mountain bike races that Aaron competes in! I hung out with Yumay and helped out with finish-line stuff a few times last summer while Aaron was racing. It’ll be fun to be the one competing at one of their races instead of spectating.

2. I joined a local running group. I was Googling for a discount code for the race and stumbled upon a Green Lake running group. The members meet up on Saturday mornings for long runs of various distances, plus track workouts, casual runs, and more throughout the week. A bunch of them are currently training for the Lake Sammamish Half!

I signed up and RSVP’d to tomorrow’s long run (and also used their discount code for the race… heh). It looks like a few other people have 8 miles to do (I have 8.5, but I have some distance to run to the meeting point), so I’ll check it out and see if I can make some new running buddies!

3. There is a TRACK right next to Green Lake. OMFG. Mind = blown. 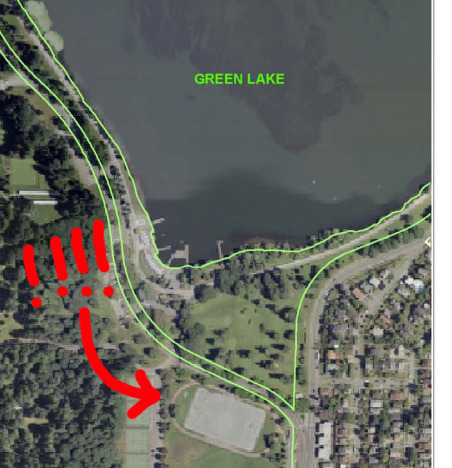 According to Seattle Parks & Recreation, it’s a verified 400 m synthetic track. Ummm…. what have I been doing with my life?? Running around the goddamn lake for speed workouts, that’s what!

4. I got new Under Armour running tights! Thank you, Aaron, for another belated Christmas gift! : )

(Apparently my mirror is really dirty…) I got my current running tights in Dec. 2010 and they’ve been worn and washed to the point of ill-fitting saggy-ness. Not cute.

I ordered these Under Armour tights off the Interwebs without trying them on in a store first, and the medium fits perfectly! (I am 5’6" and 144 lbs, for reference.) They are sooo soft and comfortable; I can see myself just wearing these around the house! Can’t wait to test them out tomorrow. 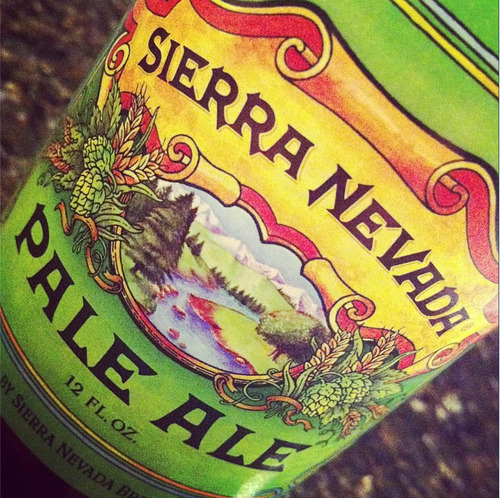 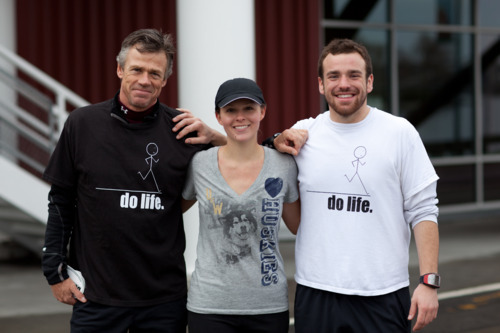 I got me a Davis sandwich!

Such a fun Do Life meetup this morning. It was a little cold and rainy, but the 30 or so people laughing, running and swapping stories more than made up for the weather. 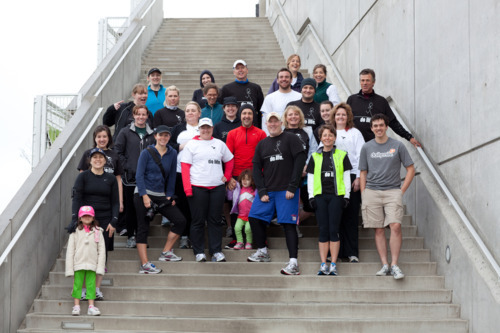 Aaron and I got some awesome photos and video clips! I’m gonna go ahead and say the Do Life video we’re gonna put together will. be. sick.

No big deal. Just an email from Ben.

I’m gonna make a video of the Seattle Do Life meetup tomorrow to share with all you Tumblr folk! Be there, and come find me. I’ll be the weird girl with the big camera and the cute boy. 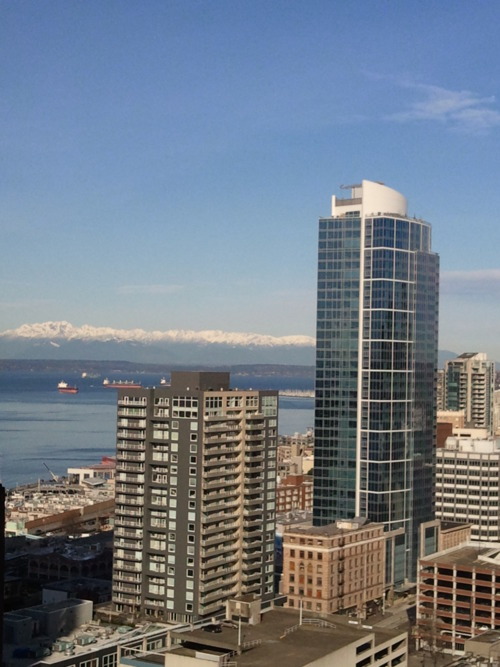 Bow down, other cities! Few can match the glory of a sunny day in Seattle.

View from my corner office the lunchroom.

I haven’t uploaded my runs to Nike+ for a looong time, so I finally did today and noticed there are now MILE SPLITS available! Hallelujah!

Yesterday’s cold, rainy, miserable run from Aaron’s place to Green Lake, around the lake and back (training plan called for 4 miles): 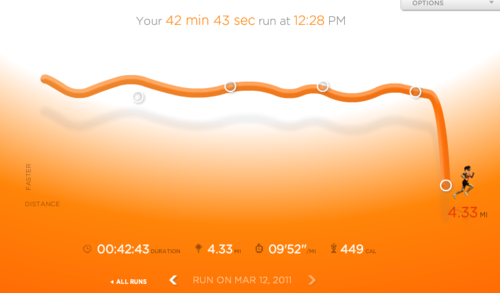 And the splits (not including the last .33 mile):

You can tell by the increasing pace each mile that it got colder, wetter and tougher throughout the journey…

This was the first time I’d voluntarily run in the rain — meaning it was already raining when we started and we decided to go anyway. I’m usually a wimp about being cold and wet, but I didn’t want to bail on my 10K training plan in the first week.

And, as with all runs, I was glad I went.

This is my city. So lucky to live here ❤

Are y’all ready to be jealous?

This is the running/biking trail that runs less than half a mile away from my house. It’s called the Burke-Gilman Trail, and the whole thing is 27 miles long.

That’s 27 miles of car-free, exhaust-free, smooth-as-a-baby’s-butt paved trail for Seattle’s active enjoyment. I do all my outdoor runs on the ol’ Burke-Gilman.

6 miles, baby! This was the farthest I’ve ever run… and it was amazing.

Aaron and I ran along the Burke-Gilman Trail to Wallingford (nearly to my old apartment/the I-5 overpass) and back on a pleasant, partly sunny Saturday afternoon. We kept a comfortable, steady pace (10:29 average) — easy enough to chat, per Hal Higdon’s instructions — and we ran the entire time.

Just to recap: a) this was the farthest I’ve ever run; b) this was the first time that I’ve run for more than an hour; and c) we ran the entire time.

My legs felt a bit wobbly afterward, but the run felt amazingly good. Outdoor runs are far superior to treadmill runs for so many reasons, including fresh air, interesting scenery, cool breezes and a sense of going somewhere. I’ll look forward to these Saturday runs, even though they’ll be long — 7 miles for the next two Saturdays.

Not that the distance is a bad thing. I felt like I could have run 10 miles… or more. Conquering a new distance makes the 15K, half-marathon and marathon seem less intimidating.

I ran 20.5 miles this past week, including 10 miles in two days (Friday and Saturday). This is nuts. For the first time, I feel like a runner.

And it feels awesome.