The Lake Sammamish Half is a relatively small race with just under 2,000 runners, but it generated the worst traffic jam I’ve ever been in prior to a race.

After sitting on a freeway off-ramp for about 20 minutes as the clock ticked closer and closer to the race start time, I gave up on the car… and I ran. 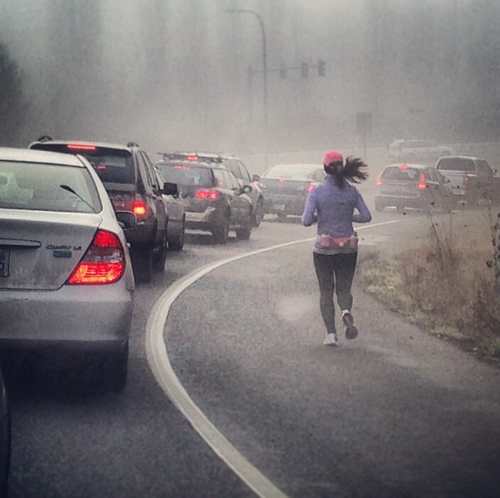 Luckily, I only had to run about half a mile to the start line. I never do any warmup running before races, but maybe I should start, because this little jog felt great (although very stressful)!

I found Aaron’s parents and my family waiting in line for the porta-potties near the start — perfect. Aaron’s mom, Greta, had my packet, and my mom had brought my favorite running tank top that I had left at her house, so I changed in front of everyone in the porta-potty lines because whatever.

Aaron eventually parked and showed up in time to take a few pre-race pics. Greta and me: 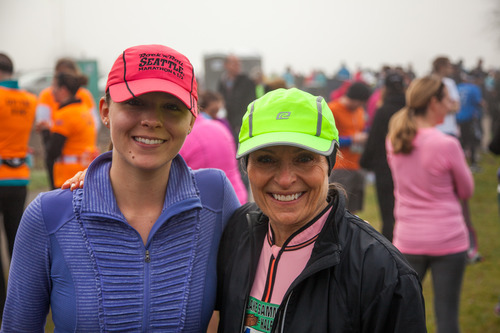 And a big smile with my dad, my mom, and my mom’s fiance, Don! So happy that they all came out! 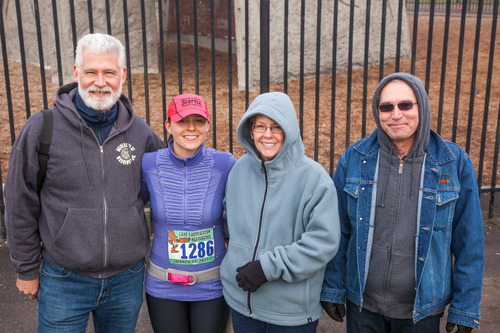 Greta and I made our way over to the start corral to seed ourselves. I hopped in at the 8:00-9:00 min/mi sign, and Greta went further back. I love how in sync we are in this pic. : ) 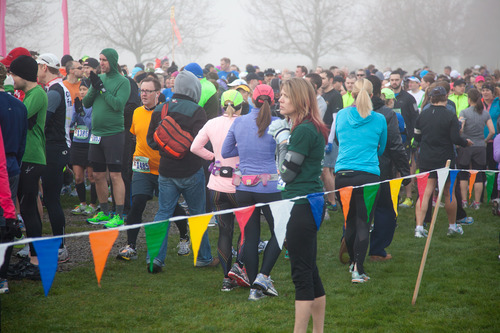 After a few minutes of hopping around in the crowd to stay warm, the race began! We strolled ever so casually to the timing mat because the crowd was too thick to run… 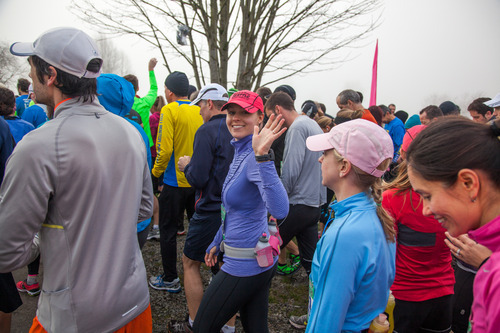 …except I also did some lame, fake running poses for the benefit of my dad’s camera. 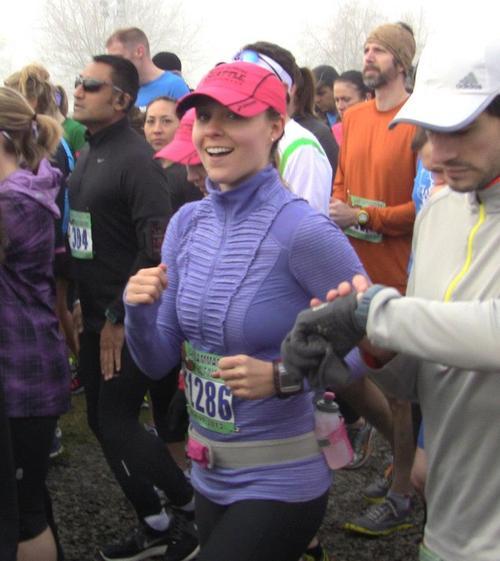 Yes, this is who I really am.

Here’s Greta! How sweet are her tights?? 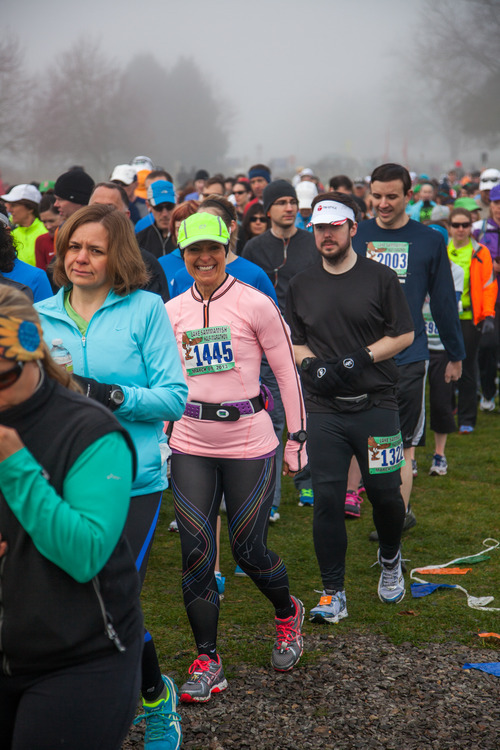 And then we were off!

I started in just the right place in the crowd, since I didn’t have to pass slower people or get passed by very many faster people. The pace around me felt a wee bit fast to start out, but I felt good, so I went with it.

I guess I should mention here that I didn’t really have a race strategy. My goal was to stick to at least 9:00-9:05 pace, and possibly start off on the slower side and finish faster.

Yeah, no. Didn’t do that. But I was incredibly consistent throughout the race! I’ll spare you the suspense and throw down all the splits right now: 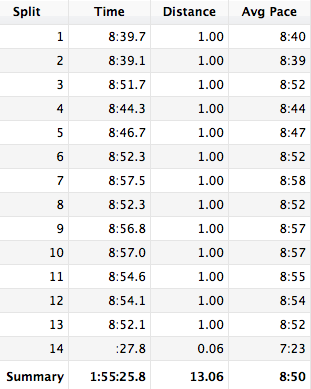 You’ll notice there were only 19 seconds between my fastest and slowest miles. MAGIC SPLITS, these are!

I first saw Aaron and his stepdad, Mark, a few miles in. Apparently I arrived earlier than Aaron expected because his lens cap was still on as I approached, and he dropped his car keys while sprinting ahead of me on the trail so he could still get some photos! I somehow managed to scoop them up mid-run and throw them back to him as I passed. 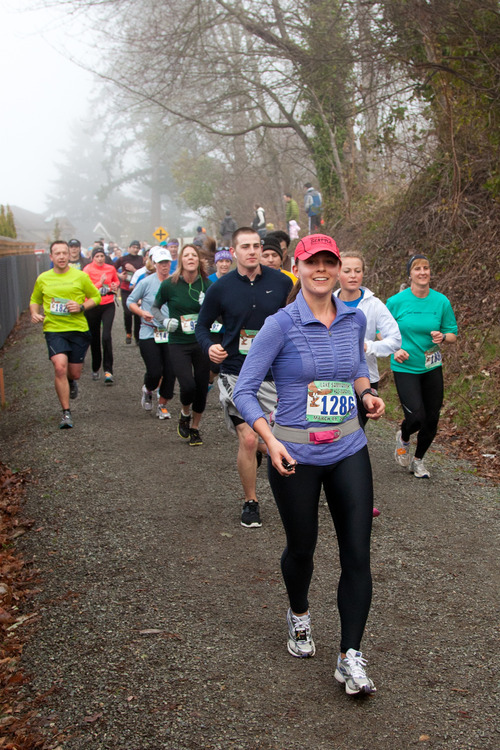 Just out for a light power-walk with Aaron’s keys. Look at all those fools behind me running.

My dad also showed up not once, but TWICE along the trail, to take even more pics! 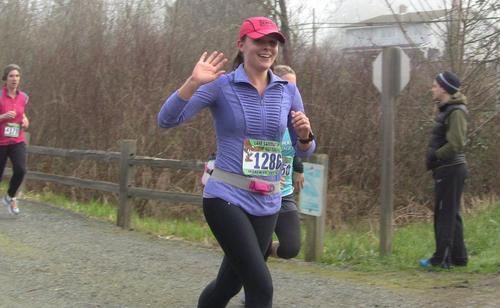 I quickly realized it took too much energy to say anything intelligible to him and just settled for a smile and a wave.

Although these photos don’t show it, I spent most of this race running right behind someone else. Like, I was a shadow to many different people, probably to the point of annoyance. It helped me to stay on pace, but not go too fast and burn out. I would simply stalk someone for a while, pass them when they became too slow for my liking, then settle in behind the next person.

Is drafting a thing in running? Hmm.

I took frequent sips from my Nuun-filled bottles and took a chocolate Clif Shot at mile 5 and mile 9. The course hopped off the gravel trail and onto a sidewalk at mile 8.5, and I was sooo happy to be done with the trail! Although, it didn’t really bother me at all while I was running on it. Those three long runs I did on the trail really paid off.

Everyone else around me seemed to really speed up once we got onto the sidewalk, but I seemed stuck at what felt like a very slow pace (although now I see that it wasn’t). I started to mentally struggle here, thinking I would just get slower and slower for the last few miles and miss my goal.

Then I head a familiar voice yelling my name, and it was my dad driving alongside me in his car!!! It was a complete coincidence that he found me as he headed toward the finish line, but it was so welcome because it gave me the mental boost I needed at that moment.

Not even that boost could help me face this wretched ending to the course, though. WHOSE IDEA WAS THIS?? 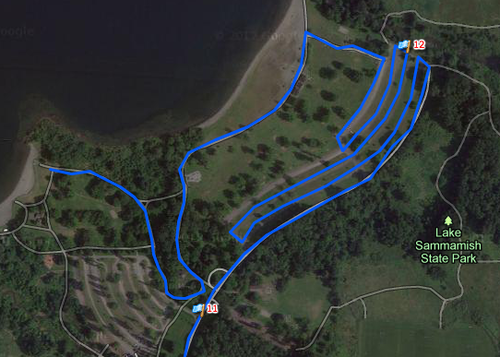 I really, really struggled with the last few miles as they wound, snake-like, back and forth. I really wanted to stop and walk for a while, or say “f*ck it” and just cut across some of those evil loops, but I knew I would be so disappointed with myself if I did.

This race came down to mental strength and stubbornness. I pushed and pushed and absolutely hated those last miles, but I knew I was so close.

Just a few more hairpin turns, then a bit of trail parallel to the lake, into the trees, then a loop around, and… and… 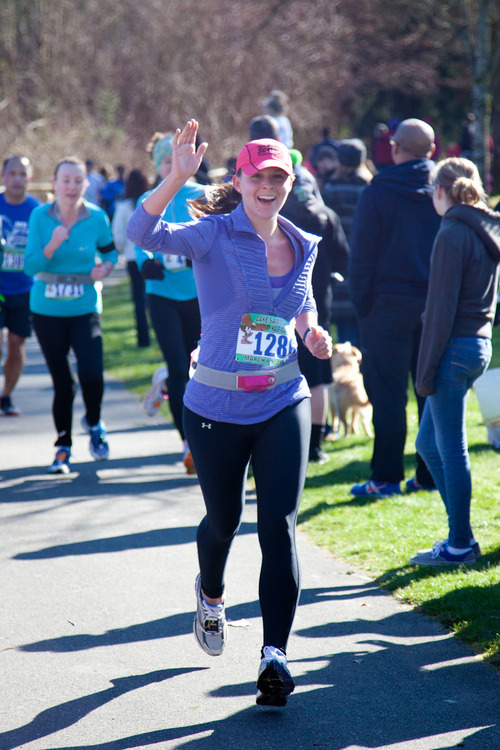 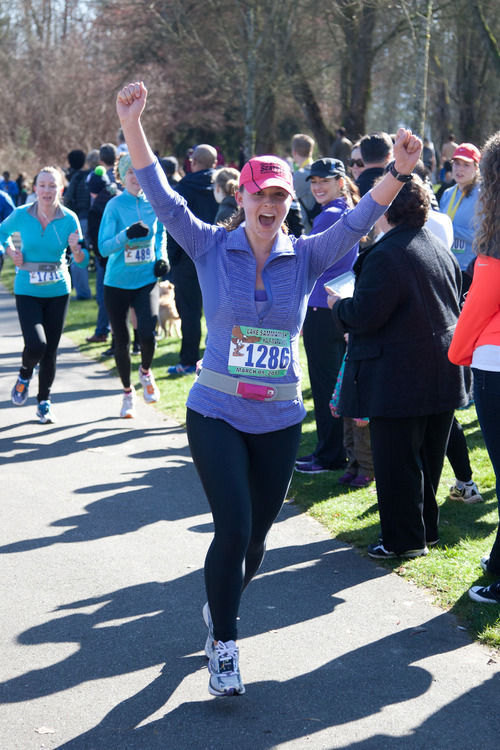 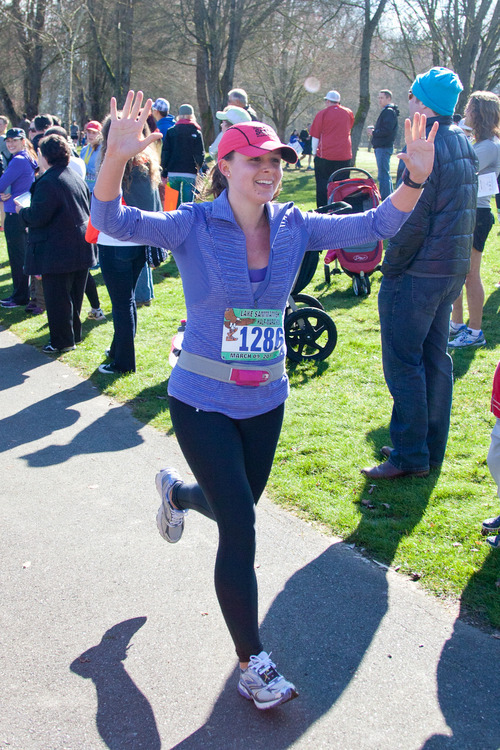 Somehow all the exhaustion melted away when I saw Aaron and my family waiting for me at the finish line! 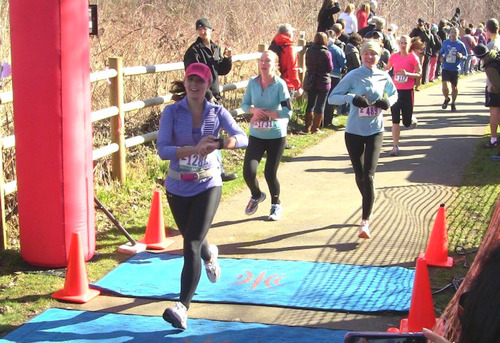 Check out Greta springing like a gazelle to the finish line for a big PR! I screamed and yelled so loudly for her! 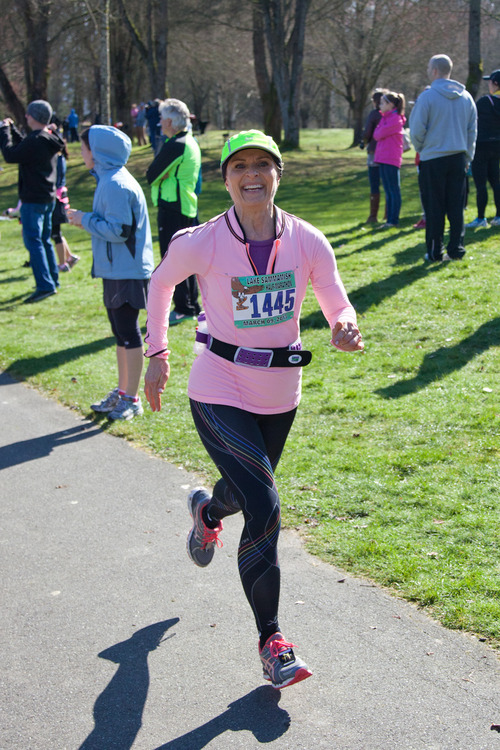 And of course we took many happy, tired pictures afterward. Half-marathon finishers! 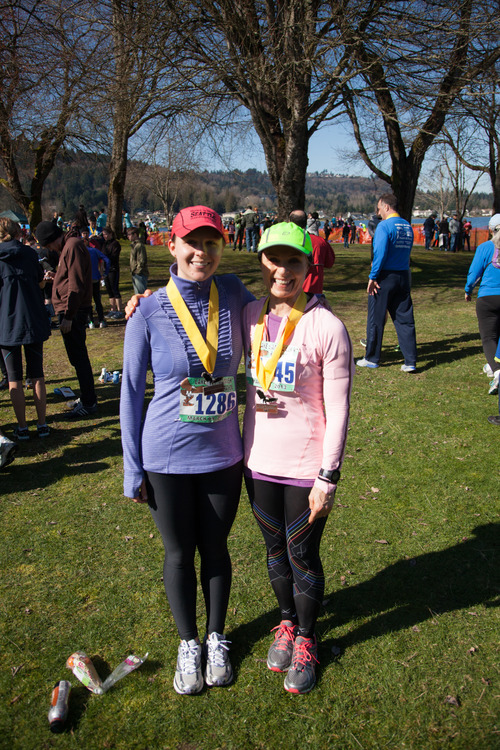 With Dad (aka the most interesting man in the world). 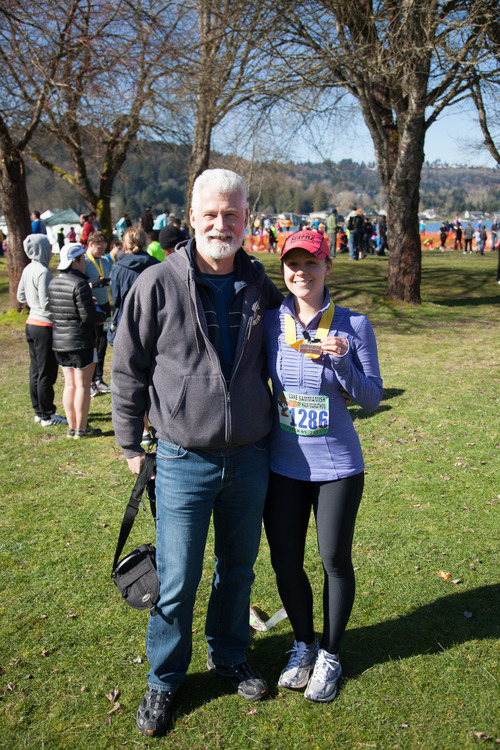 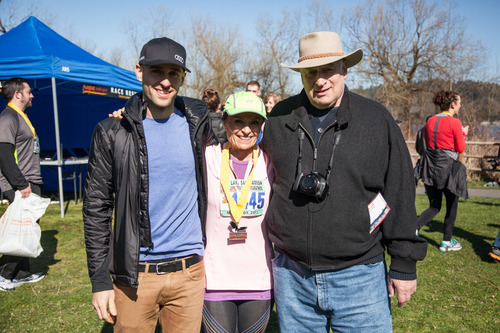 Don, me, and my beautiful momma. 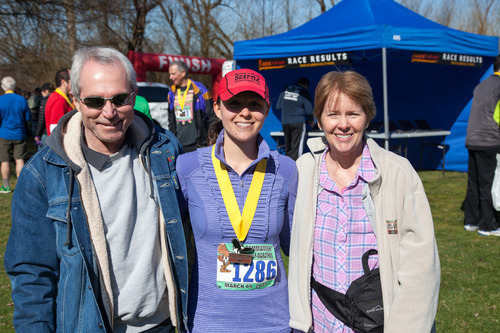 All of the above: Best spectators EVER!

Aside from the traffic/parking issues at the beginning and the torturous, winding last few miles, this was a fantastic race: flat, straight, and perfect for running a PR.

I’m awfully proud of myself for training hard for this race and sticking it out until the glorious end. It’s a huge confidence-builder as I begin training for the Rock ‘n’ Roll Seattle Marathon!

And, of course, it was incredible to have such strong support from my family at the start, the finish, and the whole way through. Plus, how fun is it to run a race with my future MIL?? Watch out, Chicago Marathon — we’re both coming for you in October!

I must mention that Greta treated us both to foot/leg massages (plus a pedicure for me) later that day!! Best idea ever. Thank you, Greta!!

Now… how’s about I start training for that sub-4:00 marathon?