It’s a rainy, dreary day in Seattle, but I still got out there to meet the Green Lake running group for my long run!

I ran a little over a mile to the meeting point. Totally stole this pic from Facebook. 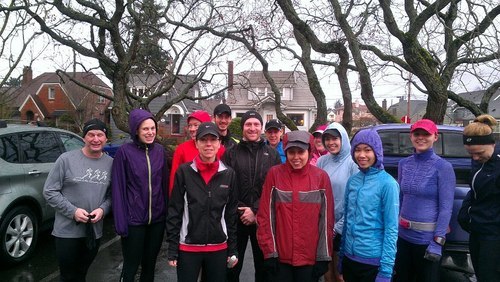 Apparently there is a huuuuge (like 100-person) group that meets at 7 a.m. every Saturday, but Andy (guy in the middle) recently started an 8:30 meetup for those of us who like to sleep in a bit.

I chatted with a few people briefly, but we took off pretty quickly, so there wasn’t much time for introductions. Andy had said in the online forum that he was planning on running around 9:15 pace, so I decided to stick with his group of about five people…

…for about a mile. The group was running at a sub-9:00 pace! I could keep up with that for a few miles, but not for an 8.5-mile long run. I said my goodbyes after a mile (two miles, for me), and split off to finish the run at my own pace. 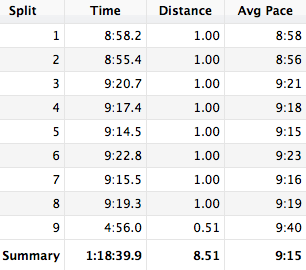 It was a rainy slog — we’re talking completely soaked shoes and socks — but I got it done before 10 a.m., which was awesome.

From my very brief experience with the running group people, all I can say is that they seem like nice, fun folks who are cut from the same crazy running cloth as me! At the very least, the group motivated me to go out in the rain for an early run, and I’m thankful for that. Maybe I’ll go again next Saturday and see if I can find someone closer to my pace.

Now, I’ve got a bit of cleaning to do before some friends come over for a girls’ night. When Aaron’s away, the girls will play*!

Speaking of Aaron, based on his Garmin live tracker it looks like he’s having fun in Maui. I think he’s mayyyyybe halfway through this ride? 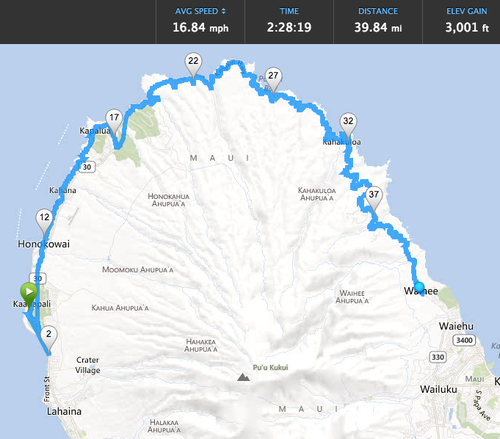 Good thing I got him a massage at the Maui Westin spa for Christmas! Homeboy is gonna need it.