I got home late tonight and wasn’t feeling a run after yesterday’s long-ish one, so I subbed 35 minutes on the bike trainer for my planned 3.5 mile run.

I did an easy warmup for a few minutes, then changed to a low gear (to make it difficult) and cranked as hard as I could on that for one minute, then relaxed on a higher gear for two minutes, and repeated one minute low/two minutes high until my 35 minutes were up.

The photos from my company’s holiday party were emailed to everyone today, and Aaron and I made a grand appearance in one single shot: 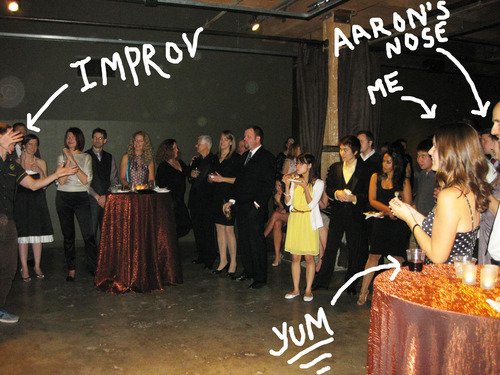 That is premium Kirkland Signature (aka Costco brand) wine you’re seeing in my cup. It made the improv troupe much more entertaining. I had about three five who’s counting? cups of it. Yum.

Anyway, regarding the title of this post, today really was the weirdest day EVER. Aaron discovered something mind-boggling and hilarious that I’ll eventually tell you all about, but I’m not going to say what it is until March or so. Just know that the next few months will be VERY entertaining for us over here, and some of your minds will be blown when I tell you!

(Just realized that sort of sounds like I’m preggo, but trust me, I’m definitely not. Check back in about five years on that one.)

To end this random post on a high note, can I just say that I’m extremely proud of my state for finally voting for marriage equality? 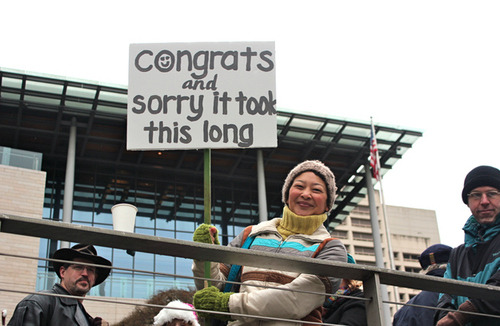 Check out 60 Moments That Gave Me The Chills During Seattle’s First Day Of Marriage Equality on Buzzfeed.