Tonight’s two-miler seemed to go by quickly… because Aaron ran with me!

The last time Aaron ran was in October 2011, so this was kind of a big deal.

This was supposed to be an “easy” two miles, but I think I ran faster than I would have at the end of a week of running because Aaron is crazy-fast, even after not running for a year.

9:30 pace is nothing to him. I don’t even think he was breathing hard. My lungs were burning, but it felt good!

Here’s what Aaron looks like when he’s running hard, finishing a 1:39 half-marathon. 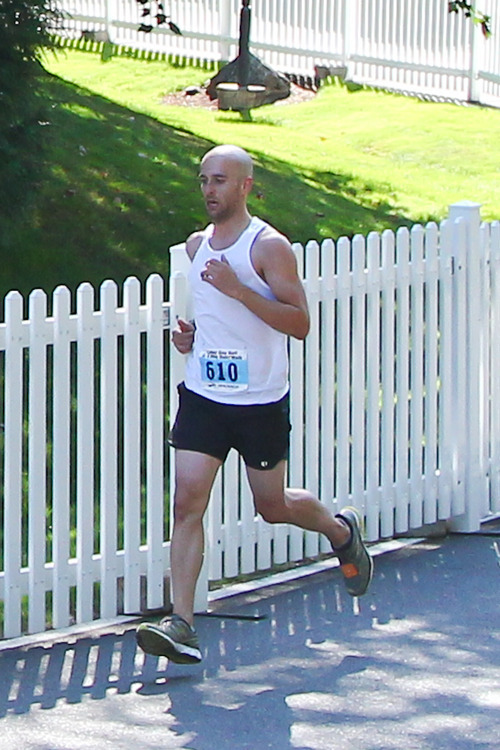 The reason he hasn’t run since October 2011 is because that’s when he was sidelined from marathon training by a nasty bout of plantar fasciitis. I don’t know exactly what that is, but apparently it’s extremely painful, and he was all like, “F#$% this!” to marathon training when he couldn’t even walk without pain, let alone run.

He was on track to run a 3:20 marathon or something stupid like that. I can’t even.

Long story long, he’s much happier on the bike with his bad knee anyway, but he’s going to run with me a few times a week as cross-training. Yay!

After our run, I did a shorter strength-training session than usual because I was hungry and over it. Three sets of eight reps:

And 20 sit-ups between each set.

Rest day tomorrow. More importantly, my company holiday party is tomorrow! The caterer is one of the preferred caterers for our wedding venue, so Aaron and I will have fun tasting all the food and deciding if we want to price the caterer for our reception.

That’s my excuse, at least…