Oh yes, I said the FIRST 20-miler. There will be a second in two weeks. Or maybe I’ll make it a 22-miler? I know I can run the shit out of 20 miles in a marathon (*cough* Seattle Rock ‘n’ Roll *cough*), but it’s kinda definitely the last 6.2 miles that really matter! 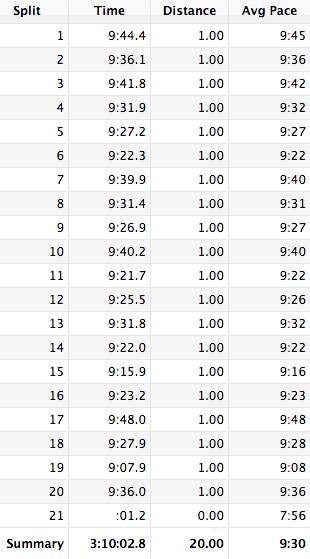 Notice my fastest mile was 19, due to the fact that there was a DACHSHUND (wiener dog) CONVENTION at Green Lake and there were like 50 wiener dogs all walking around in one spot. Literally, this is a real thing, and that is a link to a blog post about the original Green Lake wiener dog convention in 2011.

BUT WAIT, THERE’S MORE. There was a friggin’ Westie convention happening, too!!! 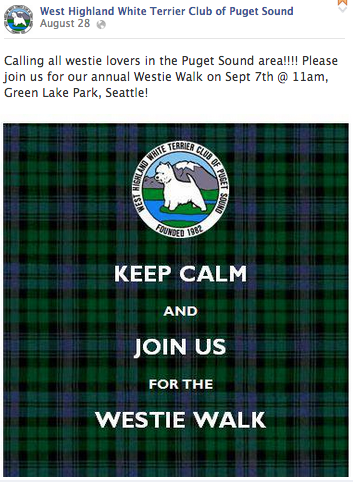 So, imagine you’ve been running for three hours, and you’re pretty tired and ready to be done. Then you encounter a GANG OF WIENER DOGS, followed by a GANG OF WESTIES, and your mind cannot compute what your eyes are seeing. Is it real? Is it a mirage? Did someone spike my Nuun with LSD?

What’s more, the two gangs were about to collide! I was picturing some real West Side Story shit!

Long story long, I got really excited about all the dogs and ran fast.

Zoe could not meet up with me after all, but that was totally fine because I was A-OK physically and mentally through this whole run. My legs were super-tired and dragging at the beginning, but I somehow picked up energy and speed the more I ran. That is like… the opposite of logic. But I won’t question it!

I’ve gotten really sick of my chocolate Clif shots lately, so I bought a variety of Gu flavors to try. Probably not the best idea to try a completely different brand of gel and new flavors on a 20-miler, but I don’t even pretend to make good decisions. 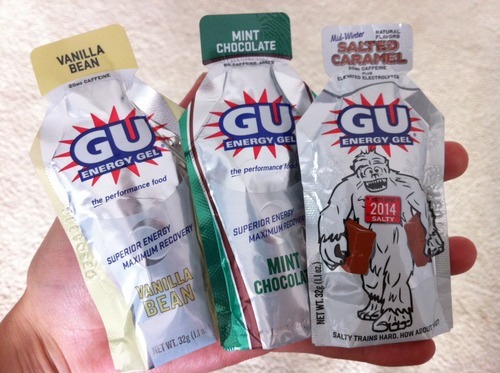 I had the vanilla bean at mile 4.5 (tasty, but very sweet), an unpictured chocolate outrage at mile 9 (tastier than the Clif chocolate), the mint chocolate at mile 13.5 (made my stomach feel iffy for about a minute, then I was fine), and never ate the salted caramel. We shall dance another day.

The verdict? Gu has a thinner consistency that makes it much easier to get down than Clif Shots. I think it’s time for me to switch! Plus, I liked having a variety of flavors on such a long run rather than eating the same flavor over and over. Marathon strategy, perhaps?

Also, I never listen to music while running, but I actually found myself singing to myself (in my brain) during this run. I mentally sang everything from John Denver’s Take Me Home, Country Roads to Katy Perry’s Roar. I’ve been on a big John Denver kick lately; I grew up listening to him, as my mom is a big fan, so it’s not THAT random. Whatever works, right?

While I was running running running, Aaron was relaying! He crushed the mountain bike leg of the Iron Horse Relay, and his team — which I believe was called Black Thunder? ha! — finished SECOND overall! 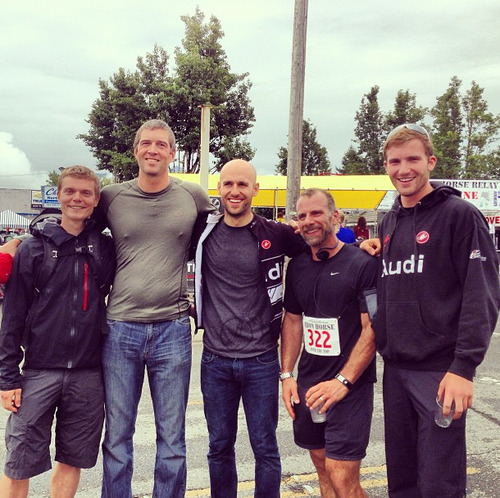 From left to right: the trail runner, the kayaker, the cute one that I am marrying, the road runner, and the road cyclist.

Black Thunder actually held the lead for most of the race, but the road runner of the second-place team absolutely crushed the final leg with a 5:XX pace and won the whole thing!

So, Aaron and I are both done with pretty intense athletic events and are now officially on vacation! We leave for Colorado first thing tomorrow morning.

The mountains are calling, and I must go!