Yesterday was one of those days that was super awesome until it turned super shitty.

I slept in till 8:00, then ate a Larabar and was out for my run before 9. This was a big win because I usually procrastinate my weekend runs and don’t do them until 11 or noon or so! 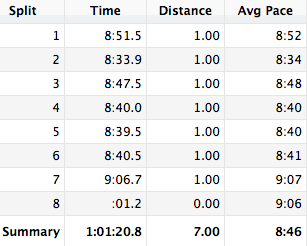 And I was done just before 10! I was so pumped to have the whole day still ahead of me!

I went home, stretched, hydrated, and ate a chicken sausage. Then I did the push-ups that I had skipped on Friday evening because I was too tired.

I can do four now pretty easily, but five is pushing it! On the last set, my head kind of felt like it was going to explode, and when I was done, my vision was a little off. I could see just fine, but there was some kind of sparkly (not quite the right word, but I can’t really describe it) stuff happening toward the outside of my field of vision in my right eye that was really distracting.

I figured maybe I hadn’t eaten enough food to recover yet, so I went about making eggs with avocado and prepping a grapefruit. The sparkling continued and even got a little worse. I told Aaron I was getting freaked out about it, so he told me to lay down and that helped a bit.

As I ate my food, the sparkling subsided for a few minutes, only to be replaced by a splitting headache. I then took some Tylenol, retreated to the bedroom, and tried to nap away the pain, but wound up having to drape a black shirt over my eyes to block out the light. Only darkness would stop my head from pounding.

I fell asleep, but later the smell of Aaron cooking something made me feel really nauseous, as did the sound of him vacuuming and a baby crying in the next building over. Light, smells, and sounds = all no good!

I finally woke up feeling better at 3:45!! So much for having the whole day ahead of me. 😦

I’m pretty sure, after a bit of Googling, that was my very first migraine.

If so, I feel AWFUL for people who have chronic migraines, because that shit SUCKS.

I hope this was a one-time thing for me, possibly spurred by the combo of a doing fairly rigorous run + push-ups without enough fuel and/or hydration. I will certainly keep my runs and push-ups separate (run in the morning, push-ups at night) in the future.

Does anyone get migraines and have advice for dealing with them? I can’t imagine doing anything other than shutting myself in a dark room to take a nap!