Apparently moving my weekday runs to the morning has caused my run-blogging to fall off the map. I used to run after work, then blog about my run while I ate dinner. Now, by the time I would sit down to blog in the evening, my morning run feels like it was a bazillion years ago and who cares anyway?

For those who do care, here’s what went down this week, starting where I left off:

Five-mile easy run. I decided to try running without eating anything first, since I’m too impatient to eat a Larabar and then let it digest before running. 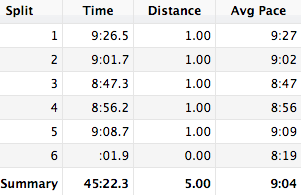 ‘Twas fine. I think I can go without eating until I get up to seven or eight miles in the morning. We’ll see!

Three miles of speedwork that wound up being not super-speedy since I tried out some new shoes! 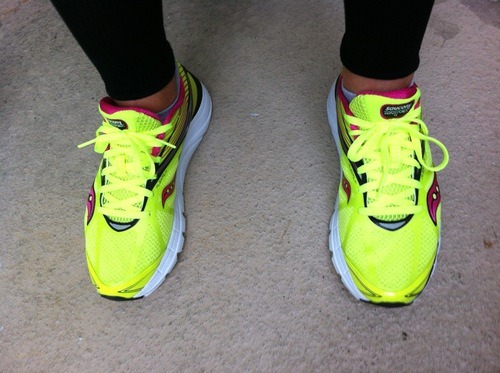 I’ve had these highlighter-yellow Saucony Kinvara 4s sitting around for a few months. Remember when the Kinvara 4s were released on May 1 and a million running bloggers reviewed them and raved about them? Was it just me who was immediately influenced to buy them? Well played, Saucony.

I didn’t want to test them while training for RnR Seattle, lest I tragically injure myself going from the 12 mm drop of the Brooks Ghost 6 to the 4 mm drop of the Kinvara 4, so I waited until Thursday to take them for a spin.

I didn’t program my watch for intervals because I didn’t want to feel too tied to a speed workout if the shoes felt off, but I did a half-mile warmup, and then alternated 400 m of speedy running with 400 m of recovery, plus a half-mile cooldown.

I ran a bit conservatively, just in case, but the shoes felt good! I can’t give ’em a full review after just one short run, but I’ll keep them around for speedier runs and apprise you of any Kinvara revelations I experience.

Rest day! I went straight to my mom’s house after work and spent the night there, since I haven’t seen her in way too many weeks. I’m happy to report that she had her LAST chemo treatment about three weeks ago and is doing really well — WOO-HOO!!! I saved my marathon bib for her and was able to give it to her this weekend. 🙂

My mom, her fiance Don, and I got up early to get to the Maltby Cafe at 6:55 a.m. It opens at 7:00, and yes, there were other people walking in along with us. Maltby is always crazy-packed for breakfast/brunch, so we beat the crowd and had huge, delicious meals in our bellies before 8 a.m. Yum.

After my food settled, I managed to drag one of my oldest friends, Carly, away from her intense studies for the Washington Bar Exam for a little run around the neighborhood. Her parents live near my mom, and she’s home for the summer, so it worked out well! 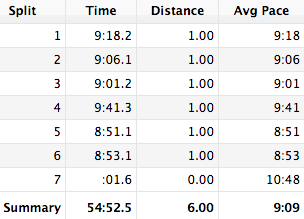 I ran just over a mile to pick her up, we ran about three miles while doing some long-overdue catching up, and I ran two miles back home. Delight! 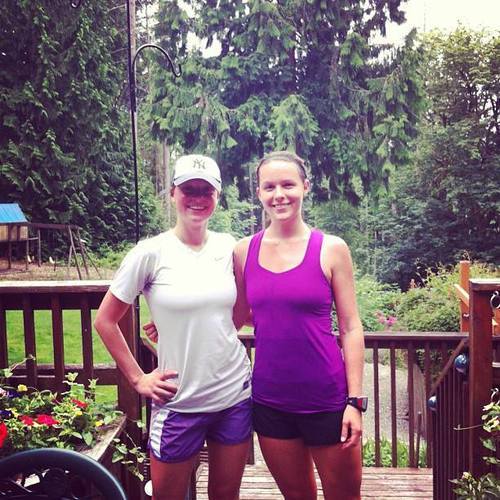 After my run, my mom and I did a great hour-long yoga DVD together. My mom just started getting into yoga before her diagnosis six months ago, and is now able to get back into it now that she has recovered from her surgery and is done with chemo.

It’s been years since I did yoga, and I forgot how much I like it! It’s just as good for mental health as it is for physical. ‘Twas a great way to get a good post-run stretch and spend quality time with my mom. 🙂

My long run was a little shorter this week — just nine miles. 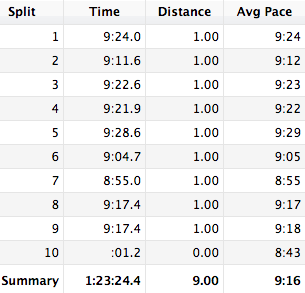 It was a little tough, probably because Aaron and I not only went to Dairy Queen on Saturday night… but THEN WE WENT TO KRISPY KREME, TOO. Shaaaaame!

It wasn’t too crazy of a situation; I had a small Blizzard, and Aaron and I split one donut. Still, I was halfway through my donut half when I was like, “We’ve got to turn our lives around…”

I think that donut half was, like, piercing my internal organs today, since I had a pesky side cramp (which I never have) plaguing me throughout this run. Lesson learned. Well, until next time.

While I was running, Aaron rode a little over 50 miles on his bike, which was apparently a “cooldown” ride after riding 110 miles with a friend yesterday.

And then we rested like normal people we went stand up paddleboarding at Green Lake!!!

One can rent all manner of non-motorized water vessels at Green Lake, and yet Aaron and I had never done this. We vowed to rent stand up paddleboards the next time we had free time on a sunny weekend day, and HEY, that was today! (No pics because we didn’t want to lose our phones to the lake).

It was so fun. Like, WHY DON’T WE DO THIS EVERY WEEKEND? fun. It was easy to stay balanced, provided a good ab/upper body workout, and was fun to experience Green Lake from the lake itself, rather than the path surrounding it.

The highlight was when Aaron and I paddled to the center of the lake and lie down on our boards for a little while, just floating peacefully and soaking up the sun. Heaven.

And then Aaron made amazing strawberry coconut-milk ice cream. 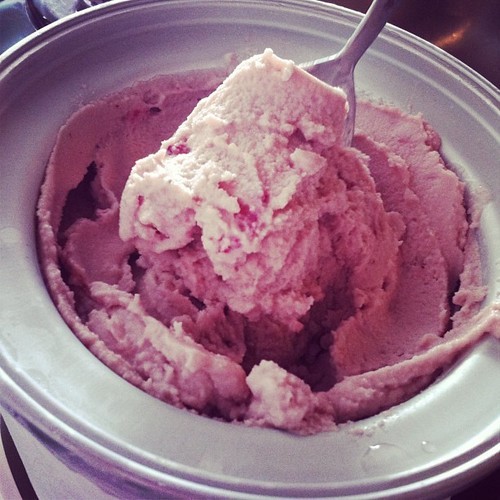 Aaron’s mom loaned us her ice-cream maker. She MAY not be getting it back.

And with that, week six of Chicago Marathon training comes to a close. I’m a THIRD of the way there, people!