After Aaron’s amazing STP finish — he biked 204 miles in just over 10 hours, NO BIG DEAL — on Saturday, we went to lunch, I dragged him to the mall (because there’s no sales tax in Oregon!), and then we relaxed with drinks while watching the end of a stage of the Tour de France at our hotel bar. 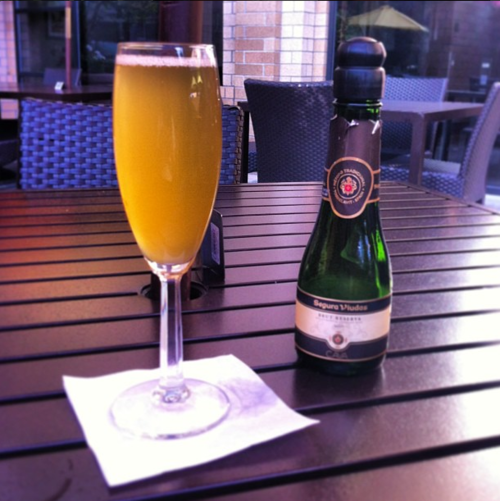 I did not know the bartender would give me an entire mini bottle of champagne with my Bellini, but I’m sure glad she did.

Later in the evening, we proceeded to a super-hip, super-delicious tapas bar called Toro Bravo in NE Portland and stayed out till ELEVEN P.M. eating things like bacon-wrapped dates and duck liver pate and molten chocolate cake.

I emphasize ELEVEN P.M. because we were both practically falling asleep on the table waiting for the bill. Aaron and I are never out that late, especially when we’ve woken up at 3:00 and 5:00 a.m., respectively. It was fun, though. I forgot that people go out and stay out on Saturday nights. Huh.

We both slept solidly until 9 a.m. on Sunday, which annihilated my plan to do my 12-mile long run early. It was the right life decision, though.

During brunch at Mother’s, we focused on putting alarming amounts of food into our bodies, since we had a 3.5-hour (turned 4.5-hour) bus ride to Seattle ahead of us. 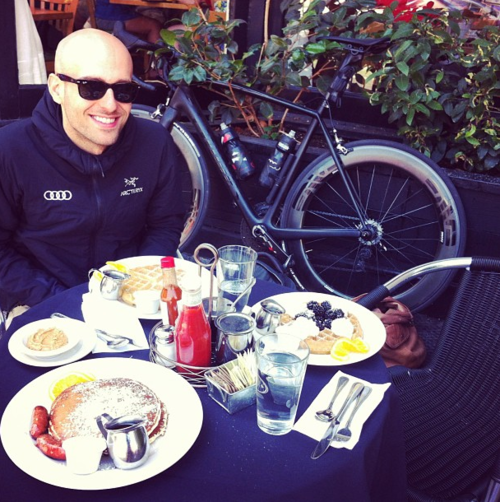 We each had a waffle, plus we split an order of pancakes. I was somehow still hungry, so I ordered scrambled eggs, and Aaron had a massive peach crisp. Mission accomplished.

Traffic on the way to Seattle was awful, so we got home much later than planned. I set out for 12 miles anyway, because you gotta do what you gotta do. 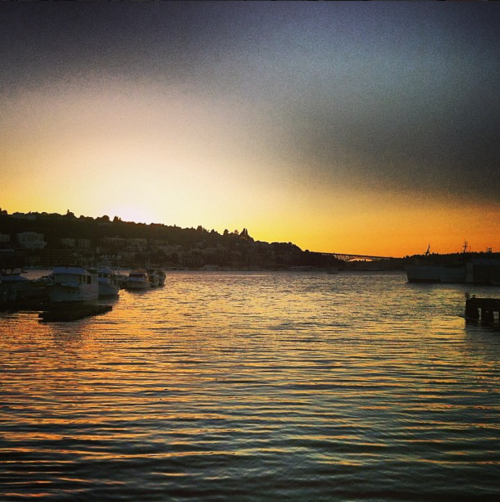 There was a lovely sunset, and then it got totally dark and I had no lights or reflective gear, so I ran verrrrrrry carefully for the last few miles so as not to trip on the sidewalk or get hit by a car. I finished at about 9:50 p.m. 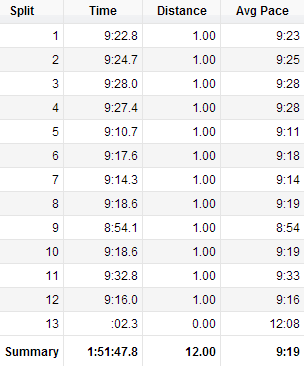 Slower first half, faster second half, and an easy pace overall. Boom.

I scratched my Monday cross-training and made it a rest/ice/elevate day, since my right foot was a bit swollen and in pain. I think my shoe was tied too tightly on my long run.

Aaron helped me wake up earrrrrrly this morning so I could do my run. I still hate hate HATE waking up early, but I did three easy miles and then felt great, of course.

It’s supposed to be 90 degrees today, so I’m happy to have gotten my run out of the way while it was still 60-something. Thanks, Aaron! This* is why I’m marrying you!