My legs may have hurt more than they’ve ever hurt before in the last 6.2 miles of the Rock ‘n’ Roll Seattle Marathon, but I’m so happy with how quickly they recovered afterward!

I took three full days off from exercise, used my foam roller and stick each day, and seriously hydrated with Nuun and water — I couldn’t get enough to satiate my post-marathon thirst!

Yesterday, my legs felt completely normal again, which seems like a miracle since I think I couldn’t walk normally for a week after my first marathon. I even felt good enough to go for an easy two-mile recovery run last night…

I’m excited to continue easing slowly back into running as I begin to train for the Chicago Marathon. I’ve given a lot of thought to how I’ll change my training this time around to become a better runner and avoid making the same mistake I made at RnR Seattle. More on that soon!

But now: A NUUN-TASTIC GIVEAWAY!

I’ve used and blogged about Nuun Active Hydration tablets for years. Aaron and I keep a drawer embarrassingly full of it at all times to aid our athletic pursuits. 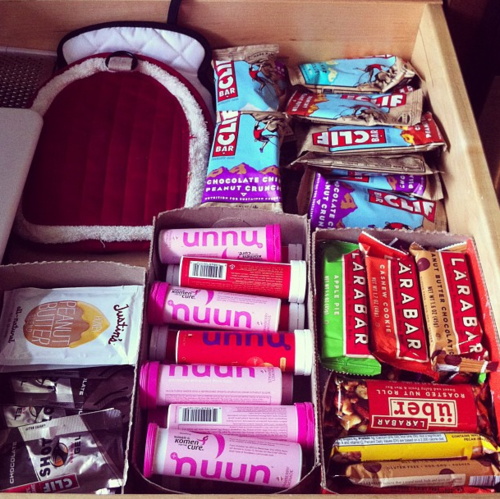 I carried Nuun in my fuel belt during my first marathon in December 2011, and also drank it like crazy throughout my training, the race itself, and recovery this time around.

Here are the top three things I love about Nuun:

1. IT’S LIGHT: At one marathon aid station, I made the mistake of grabbing a cup full of Gatorade, and I nearly gagged when I took a sip! It tasted so sugary, artificial, and gross. I had to throw it away, and made sure to stick with the Nuun I had in my fuel belt and grab only water at the rest of the aid stations.

I also love being able to drink as much Nuun as I want to pre-hydrate (is that a thing?) before races and to rehydrate afterward because it’s packed with electrolytes, yet contains zero sugar and only 8 calories per tablet.

2. IT’S PORTABLE: It’s so easy to throw a tube of Nuun into my gear bag for a race and keep one in my purse for any other time I want to boost my water. For long runs, I fill my fuel-belt bottles with Nuun, and put extra tablets in a plastic baggie so I can refill and re-Nuun my bottles throughout the run. For those double-digit runs, there’s nothing better!

3. IT’S TASTY: I’m currently obsessed with the WATERMELON flavor! Since I’m on Team Watermelon for Hood to Coast, I bought a four-pack to try and wound up loving it so much that I used it during the marathon. It tastes juicy somehow — absolutely perfect for summer! My other faves are Strawberry Lemonade and Fruit Punch. I’m one of those people who always gravitates toward red and pink flavors of things. 🙂

WIN A FOUR-PACK OF NUUN — YOUR CHOICE OF FLAVOR!

There are a few ways to enter; choose one or all:

1. Reply to this post/leave a comment (via Tumblr or Disqus) telling me how you like to recover after a race (ice bath? long nap? beer?), and/or which flavor of Nuun you’d choose if you win.

Obviously there’s an advantage for Tumblr users here, but I gotta show love to my Tumblrs. You can always create a Tumblr if you want those extra chances. 🙂

Be sure to enter by 7 p.m. PST on Monday, July 1! I’ll announce a random winner on Tuesday. The winner must be able to provide a U.S. address for shipping.

Psst… if you want to get some Nuun, like, yesterday, you can use the discount code hydrateHTC to get 15% off Nuun products at shop.nuun.com through the end of September. This code is valid on all purchases, so you can use it more than once!

Prize sponsored by Nuun. No compensation was provided to me, and all Nuun-pinions are my own.