I’m done with my two-day work week and am officially on vacation until next Monday! Yayyyyy!

I celebrated by running four miles of hills tonight, as one does. 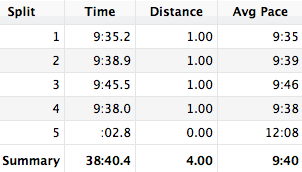 You can see that I started with one hill and then changed my mind and went to another hill; that was due to sketchy people in the vicinity of the first hill, which was sort of secluded in a neighborhood. I don’t hang around for sketchiness.

The second hill was along a busy, major street, so that at least if someone tried to kidnap or stab me (legit concern), everyone else would see it and… do something, hopefully.

Anyway, I made it through the run un-kidnapped and un-stabbed, but I didn’t feel like I got a tough hill workout in. I’ll make an effort to find a really disgusting hill next week, and then run it until I feel like I’m going to puke or die. That is called success, people.

Now it’s time to pack for vacaaaation!!! I will need a ridiculous amount of workout gear, since I have two runs on my schedule (6 miles Thursday, 17 miles Saturday) and we plan to hike quite a bit. There’s not much else to do in the small town where we’re staying, so we might as well get all up in the wilderness.

I may post a photo here and there, but I’m not planning on blogging extensively while we’re away. I’m going to make an effort to seriously limit my screen time — I’m even bringing an actual, paper book to put in front of my face and read.

See you when I see you!