I’m officially at that point in marathon training when I look at my plan and think, “Oh, my long run is only 13 miles!”

Only. It’s all relative.

And if you’re going to run 13, you might as well add an extra 0.1 and make a half-marathon out of it. 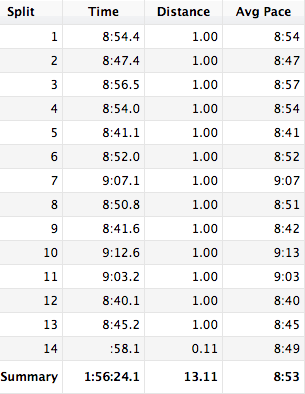 Nothing remarkable to report, other than that I felt comfortable running faster for longer, which is always good!

I also noticed a few things related to the Boston tragedy: flags at half-mast, cars giving me the right of way at crosswalks more promptly than usual, a friendly driver honking and waving near Green Lake.

I don’t particularly deserve any of that, since it’s not like I was in Boston last Monday, and I wasn’t decked out in blue and yellow or anything. It just shows that there’s a general goodwill toward runners right now, even all the way across the country.

Now, I’m super-excited that Aaron and I have a vacation coming up this week! It’s been really gray and rainy in Seattle lately, but where we’re going… 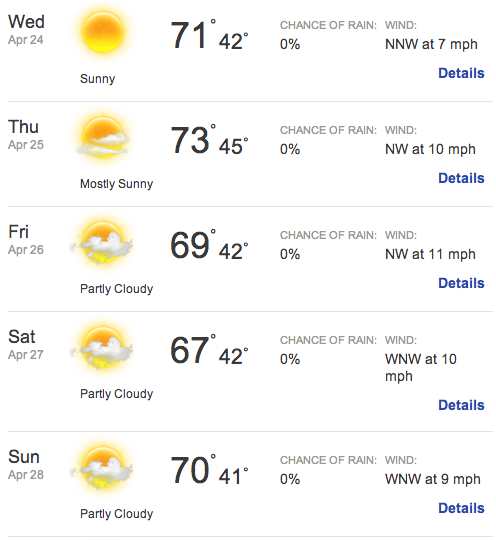 …there’s sunshine and ZERO PERCENT chance of rain! It doesn’t even matter that it’ll be partly cloudy for a few days; the NO RAIN part trumps that.

It’ll be an active vacation full of running (for me), cycling (for Aaron), hiking, and hot-tubbing (for both of us), and we’re staying in-state, so we’re not breaking the bank. After all, we have a wedding to save for!

Nothing like a two-day work week, then a road trip to sunshine. But first, Aaron and I are doing our very first spin class tomorrow morning, and then belatedly celebrating Aaron’s birthday with his parents (they were on vacation). Fun fun!