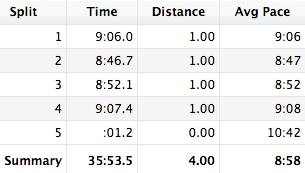 The only thing of note from this run was that there was a guy walking around Green Lake wearing a full gas mask. WHAT. IS. THAT.

I feel bad if he has some sort of ailment that requires him to wear that in public, but… I really can’t think of one. Anyone?

I mayyyyy have run a little faster as I passed him.

Now it’s time to eat Aaron’s homemade Paleo meatballs (he made 48 of them because we powered through them so quickly last time, ha) and catch up on Mad Men!