I was sick after my run yesterday.

And by “sick” I mean that I was in the shower, then had to exit the shower prematurely in order to be sick, and then re-enter the shower to rinse off the soap and such. (Sorry for the overshare; I bet you wish you could un-read that.)

I felt weak and woozy and nauseous and all that gross stuff. I pretty much staggered to bed straight from the shower and slept for three hours.

And then I felt better! Fun story, huh?

Aaron and I both didn’t feel great yesterday, and I think we’re having carb withdrawals. We’ve reverted back to Paleo eating, and I guess it’s not easy to quit carbs cold-turkey after eating anything and everything we wanted over the past few weeks.

I broke down last night and had a 6" meatball sub from Subway (random craving), but Aaron stayed strong… and then he felt icky and couldn’t sleep last night. I wonder if I’ll have to go through that again since I dipped back into the delicious land of carbs.

I slept in laaaaate this morning and felt much better, both stomach-wise and sniffle/sneeze-wise. For breakfast, I made the sweet potato hash recipe that I saw on Tumblr a few days ago. 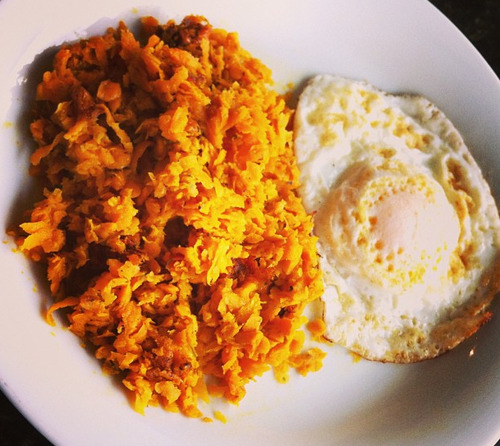 Pretty good, and super filling! Although grating a sweet potato by hand is not at the top of my list of fun activities, so this probably won’t be one of my regular dishes.

Later in the afternoon, I did my 40 minutes of cross-training on the spin bike while watching the Seahawks beat the Redskins!!! Throwing up a W for the WIN! 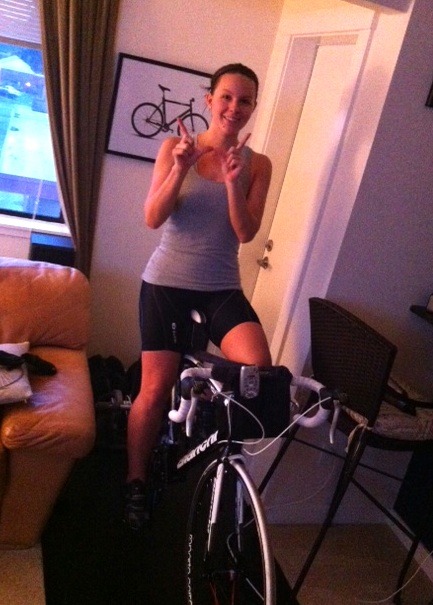 And that wraps up six weeks of (non-existent) half-marathon training! Six more weeks to go. Super-happy with all the workouts I did this week: