It was raining this morning, and even at 8 a.m. I started thinking, “Maybe I’ll just do 20 minutes on the bike trainer instead of running two miles outside tonight.”

Then I left work late. Then the bus was 20 minutes late. I just wanted to get hooooome. That’s when my best-laid plans started crumbling in my mind.

It wasn’t raining when I got home, but I still didn’t feel like running. I asked Aaron: “I’m supposed to run two miles tonight, but I might just do the bike trainer. What should I do?”

He said I should run, and I guess that was all I needed — someone to tell me what I didn’t want to hear, because I didn’t have the mental strength to tell myself.

It’s not a big deal to talk yourself out of one two-mile run, but it sets a dangerous precedent. If it’s that easy to quit on two miles, it’ll just gets easier and easier to quit as the runs get longer and harder. On the flip side, the more I get out to hit the cold, dark, wet pavement — no matter what — the more I’ll continue to do so. Momentum, you know.

Anyway. I lifted weights after the run. I wasn’t sore at all after Tuesday’s lifting session, which was my muscles’ way of saying YOU’RE NOT DOING IT RIGHT.

Lastly, since this was a boring post, here’s a fun fact: Did y’all know that Aaron used to weigh 220 pounds? It was when he was in high school, long before I ever met him, and it’s hard to believe when you see him today in the 170s (he’s six feet tall). 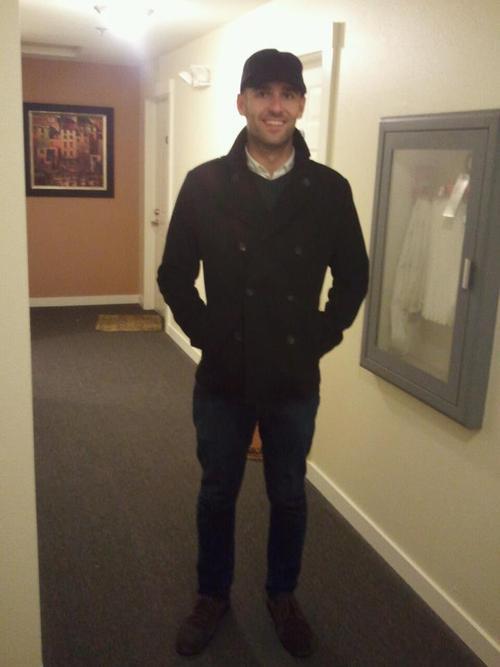 I long ago came to terms with the fact that he looks better in skinny jeans than I ever will.

This guy actually never stops eating, but here’s how he continues to fit into skinny jeans:

He’s not perfect with diet and exercise all the time, but no one is (God knows I’m not). I’ve seen him pack away junk food like nobody’s business when he wants to. He just likes the way he feels when he exercises and eats good food, and so that’s what he does — with some pretty incredible willpower.

So that is the person who gives me mental strength when I need it to do my workout. And I get to marry him!