My last training run before this 5K — a two-mile “easy” jaunt — was anything but easy. For some reason, my legs were heavy as I slogged through light drizzle to complete what felt like the longest two miles of my life.

It did not bode well for the race.

I was bummed after the two-miler, but I knew there was nothing more I could do at that point. Rather than worry about the race, I went about my normal life… and even ate and drank some items that one typically shouldn’t eat and drink the night before a race:

Aaron’s family had a big, spirited gathering. I enjoyed it. : D 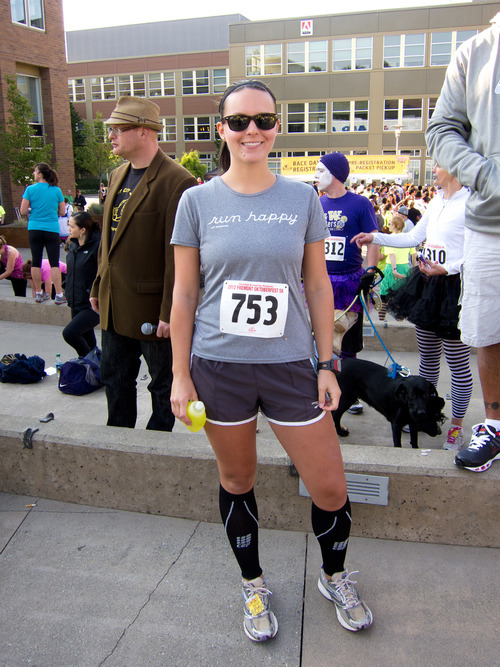 Race morning was filled with the usual jitters. I was so nervous, but all of my nerves faded away once I pinned on my bib and began to absorb the crowd’s excitement at the start line. 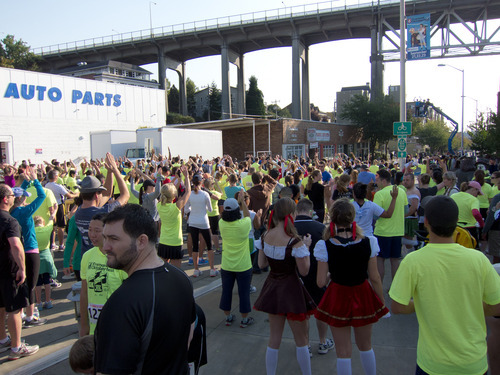 Aaron was my excellent supporter and photographer. 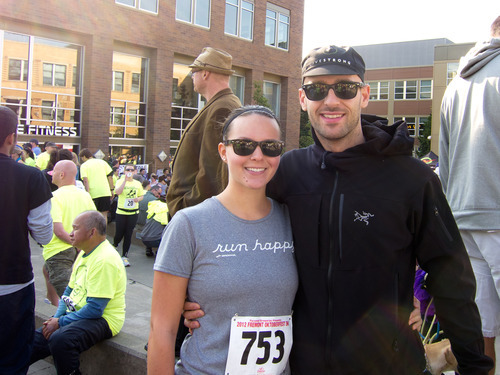 Nervous face. But at least my stomach felt OK! 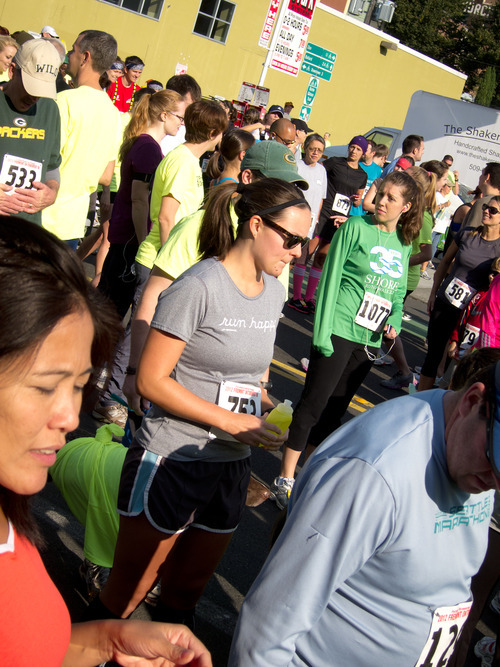 I decided to run with a water bottle from Aaron’s fuel belt (I seem to have misplaced mine…) since this race has no water stops and I knew I’d get thirsty.

Soon enough, we were off! 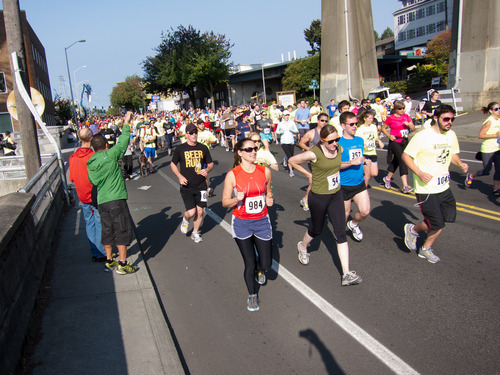 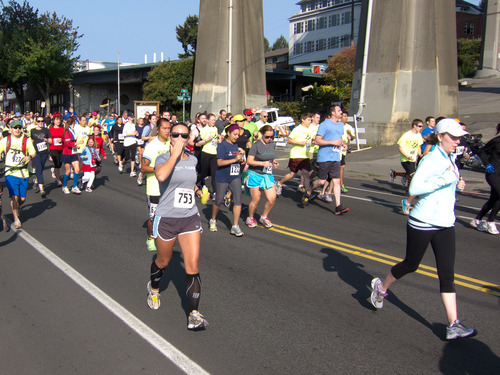 The first mile featured a slight hill, which helped keep me from going out too fast. I kept my pace comfortable and steady, ignoring those who blew by me up the hill.

I later overheard a woman saying, “Guess who passed me on that hill? A pregnant woman pushing a stroller holding a three-year-old!”

Props to that pregnant lady!!

The race began at 10 a.m., and the sun felt pretty hot in the many shadeless areas of the course. I sipped from my water bottle frequently and wound up drinking almost the whole thing by the end!

I gradually increased my speed throughout the race, but was careful not to push my limits until the very end. I saw more and more runners dropping off to the sidelines to rest or walk, and I absolutely did not want that to be me. Plus, I knew from running this race twice before that the 0.10 mile at the end of the course is slightly but exhaustingly long, and I wanted to save my energy to sprint that final bit to the finish line.

Aaron saw the clock ticking closer to 30:00 and hoped he would see me soon… 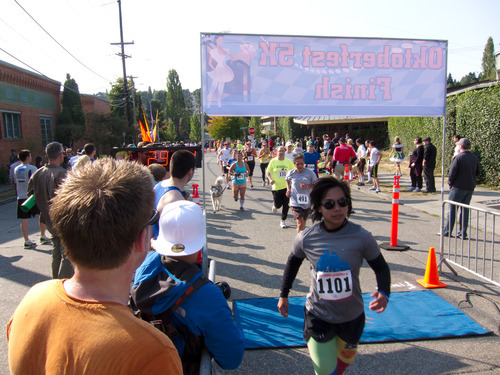 …and I snuck across the finish line with an official time of 29:22 and my hands in the air!

This photo is like “Where’s Waldo?” except more like, “Where’s the dork who’s extremely happy to finish her first post-injury 5K?” 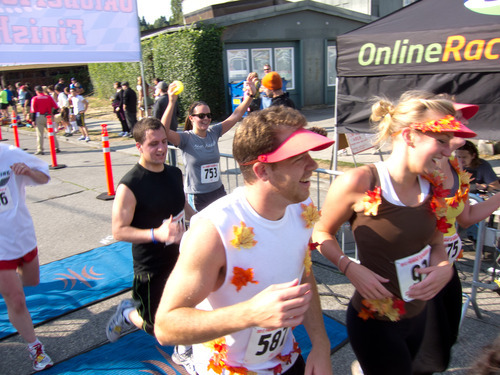 I’m really happy with the negative splits from my Garmin.

You can see that the last bit of the course was actually 0.17 mile; Aaron said a woman flipped out at the race organizers just after she finished due to the long course… because obviously this was the Olympic Trials. C’mon, now.

I was just really happy to finish in under 30 minutes without walking, and to rest on the sidewalk afterward! 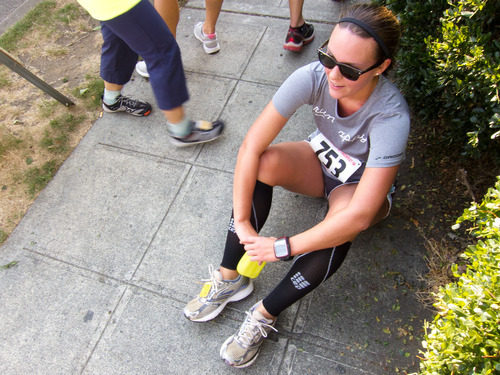 And guess what? I had zero pain of any kind. My ankle did great, and my bike-accident injuries are 98% healed (save for some lingering scabs and a mildly sprained ring finger) and didn’t bother me. 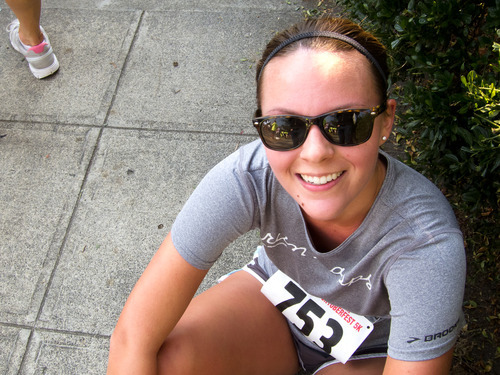 I found my college friend Moorea at the finish line — she had just run her first-ever 5K the day before, and decided to follow it up with another one! Hardcore. 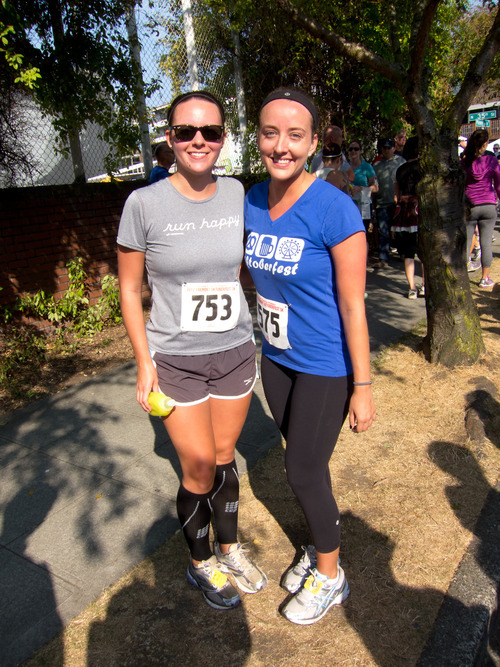 And that was it! Success.

Simple, but it meant a lot to me.

I sprained my ankle on May 6.

I was able to walk unassisted on June 11.

I ran (very slowly) for the first time on June 26.

I ran a mile straight through for the first time on August 2.

I battered my entire body in a bike accident on September 3.

And then I ran 3.1 miles straight through, like a boss, on September 23.