Robin asked yesterday if I ever wrote about how Aaron and I met, and the answer is no. I think I’ll do that now. Feel free to move along if you don’t care about this stuff, since it’s kinda long.

Once upon a time, at my company’s July 2010 quarterly party, I somehow got into a conversation about the University of Washington (go Huskies!) versus Washington State University (boo Cougers!) with a long-bearded, cane-wielding, homeless-looking person who was apparently a co-worker of mine. I had a few company-provided drinks in my system, so I’m hazy on the details, but I just remember thinking, “Who is this extremely strange person?”

Fast forward to September 2010. I started my workday, naturally, by raiding the kitchen for free breakfast. My co-worker Rob found me staring into the pantry and asked, “Whatcha lookin’ for?” I replied with a deep sigh, “Ohhh? …chocolate.”

He proceeded to tell me about a magical chocolate treat called Powerberries that he’d found at Trader Joe’s and couldn’t get enough of. I was intrigued, but had to get to work. Later that day, Rob emailed me and invited me to visit the 20th floor to try some Powerberries. Of course, I ran up from my 18th-floor cube right away to partake.

Once there, I found Rob, the Powerberries and… this guy I’d never seen before. He was wearing a sweatshirt, jeans, bright red shoes and a baseball cap. I remember his eyes looked extremely bright and blue in the afternoon light. He worked right next to Rob and was a big Powerberry fan, too, so we all ate them and chatted together.

I remember going home that day and saying, “Mom! There’s a cute boy at work!”

It turns out that cute boy was named Aaron Pass, and he was the same guy who I’d talked with back in July. But back then, he was still recovering from a devastating motorcycle accident and had become unrecognizable (to me, at least) thanks to his long beard and cane.

(I found out later that he not only remembered me, but pretty much had a crush on me from the first time we talked. But I digress.)

Rob, Aaron and I had an email thread going about Powerberries and how delicious they were, but somewhere along the way, Aaron and I dropped Rob and just continued chatting amongst ourselves. I could never tell if his emails were just friendly or flirtatious. I remember secretly checking his Facebook for signs of a girlfriend, but didn’t friend request him for a while, lest I give myself away.

Then, one day, he asked if I wanted to get lunch. I remember trying to dress extra-cute the day we went out (to Chipotle, FYI), but he wore a ratty old sweatshirt, so I figured he was just being friendly and wasn’t interested in me.

Then a bag of Powerberries and a cute post-it note appeared on my desk one morning. Then I knew.

The problem was that I had just decided to be single for a while, since I had dated a string of unimpressive guys and lost faith in my ability to choose boyfriends. I was determined to go solo for an undetermined period of time. I had just started running and really wanted to focus on becoming a stronger person on my own. I decided to be friends with Aaron, but not date him. He was a co-worker, after all, and I wasn’t interested in all the potential awkwardness that could come about.

But Aaron continued to impress me. I had told him I wanted to get into DSLR photography, so he invited me to go hiking with him and said he’d teach me how to use his camera. I was nearly knocked over by the gesture. It was such a sweet, creative way to ask me to hang out! Plus, it showed that he cared about helping me pursue a dream.

We went on that hike on October 23, 2010, and had a great time. I was clumsy with the camera, but it was fun to learn. I snapped this pic with my cell phone. 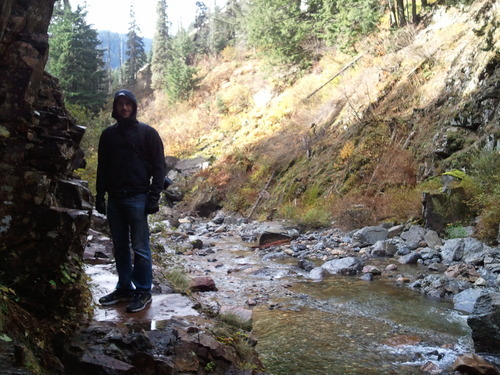 And we ate peanut butter and jelly sandwiches by this waterfall. 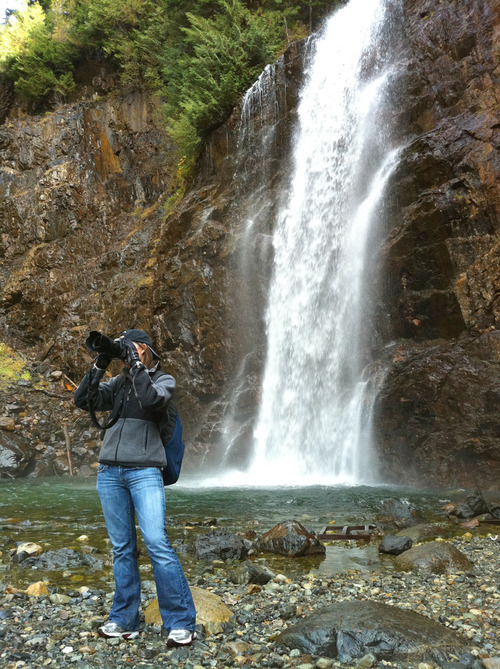 I remember at one point, when Aaron was explaining how to adjust the aperture on his camera, that I kind of wanted him to kiss me. But then I also told him I didn’t want to date anyone for a while. Hmm, I’m a funny one.

When he dropped me off at home that day, my mom invited him in for a beer and a pushup challenge. Not weird at all. 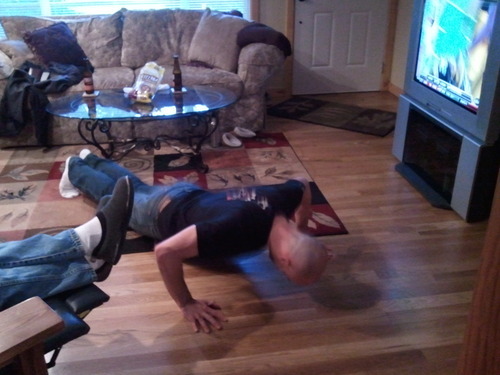 And then came Halloween. I was running my third 5K (29:13) and Aaron decided to join in and do his first one ever (23:32 with zero training…WTF). I’m pretty sure this is the first photo we ever took together. 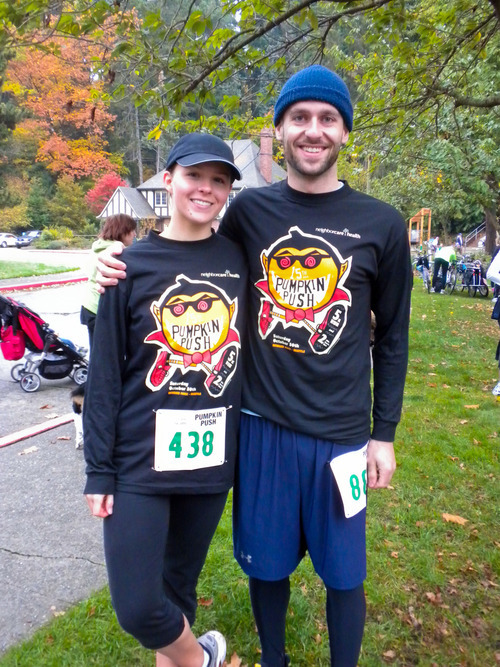 Aaron didn’t have plans for Halloween night, so I invited him to a friend’s party.

I dressed as a lobster. He wore a black dress and went as Natalie Portman in V for Vendetta (when she had a shaved had). 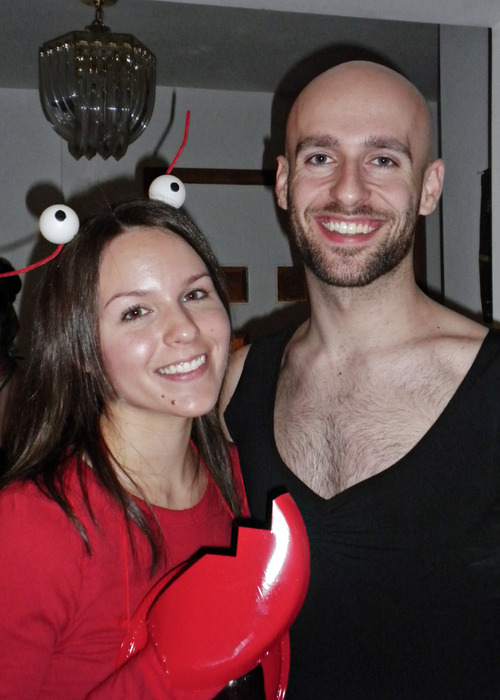 And, of course, that was the night we had our first kiss. Then I kind of forgot about that whole “staying single” thing and we just kept on kissin’. 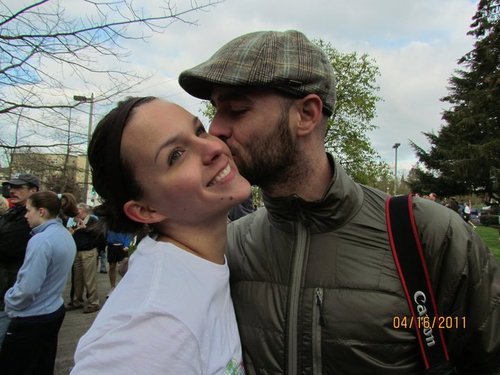 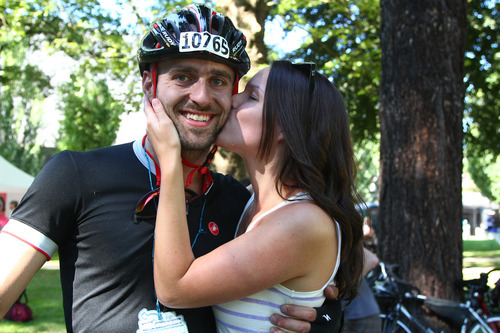 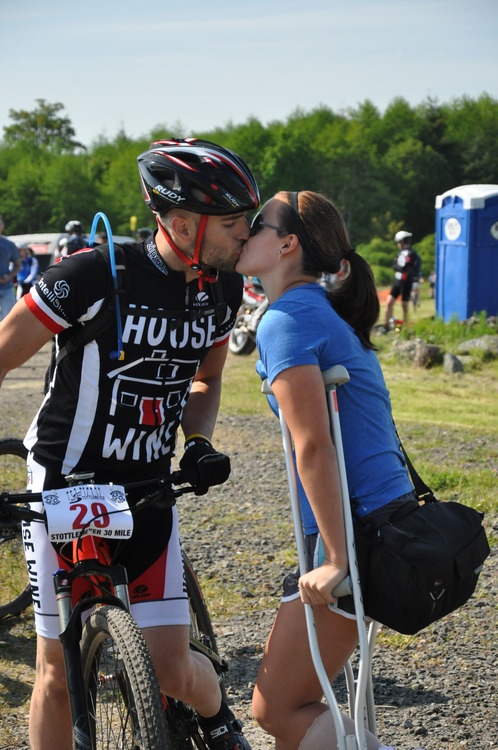 We became best friends and did pretty much everything together. 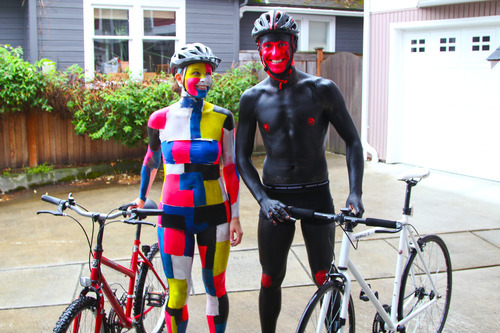 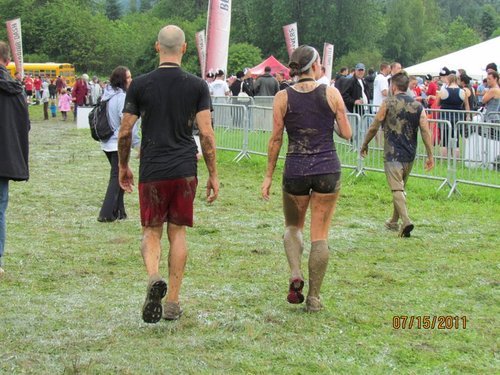 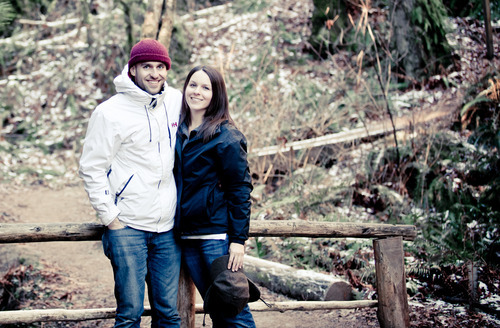 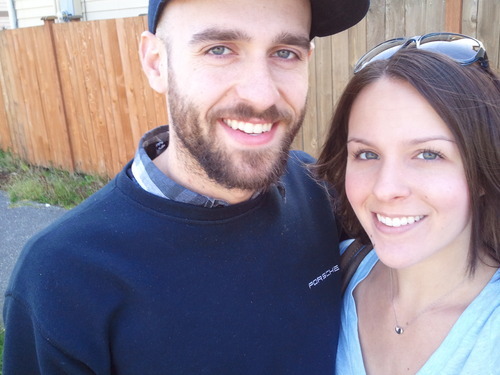 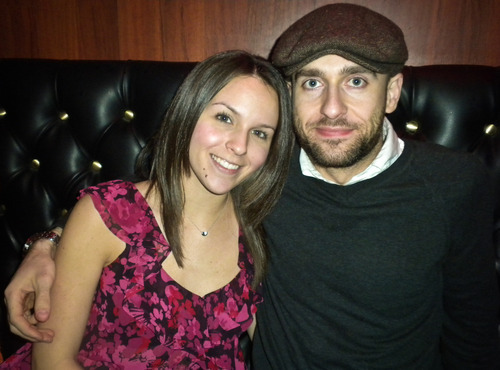 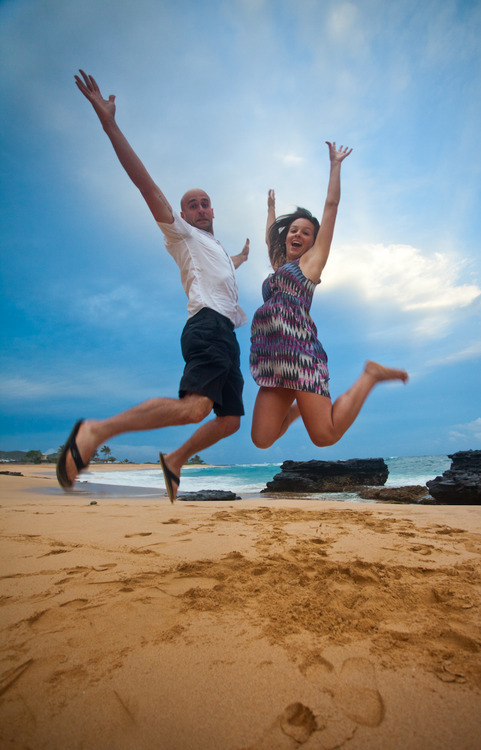 Fun fact: When we first started dating, he said he NEVER bought flowers for girls, so I shouldn’t expect any. 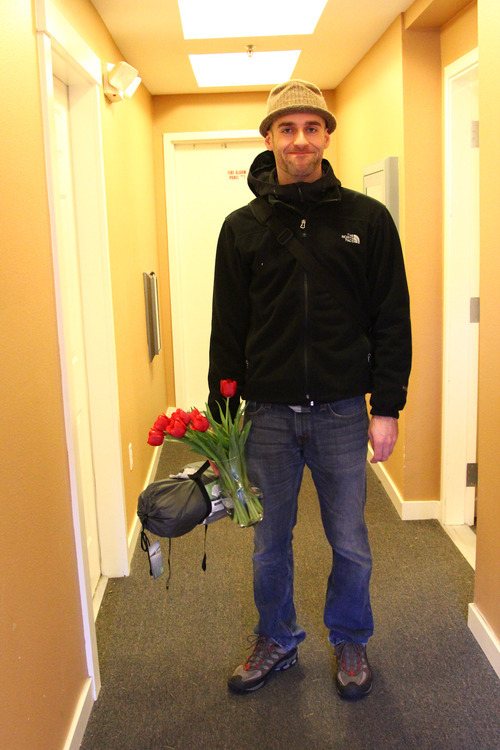 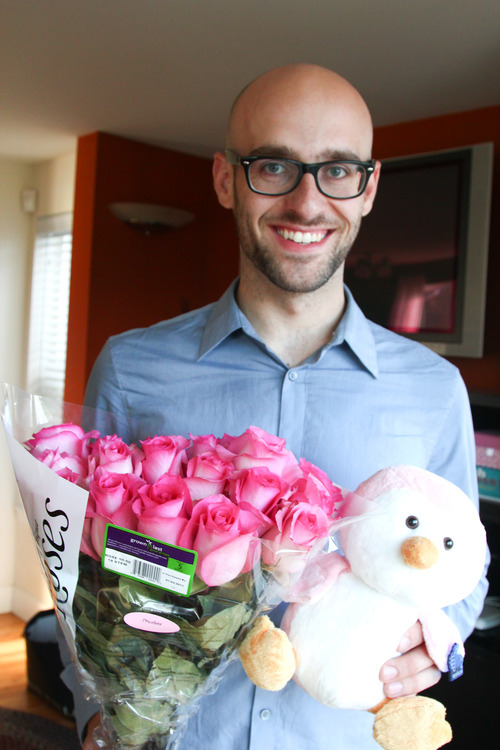 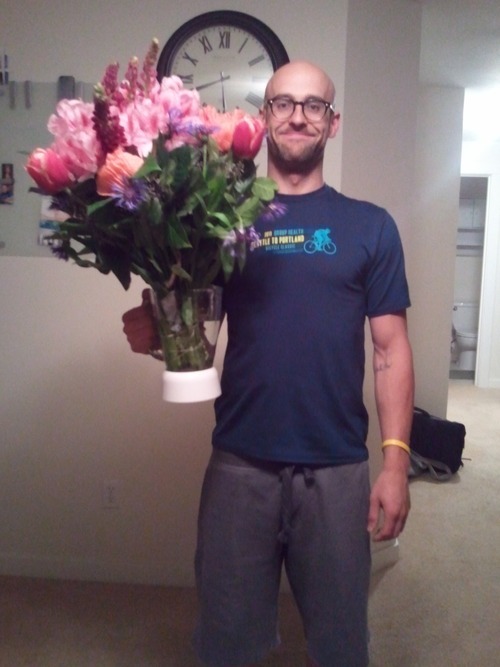 These were my “welcome home from your long-ass trip, please never leave again” flowers. They are in a blender.

He doesn’t like to buy them for special occasions, but rather to surprise me on random days.

Yesterday, when I got these ones, I said, “What are these for?? I was only gone a week!”

His simple reply: “Because it’s Thursday.”

I guess I do words, not flowers, and so these are for him: Thanks for being my best friend, my partner in crime and the one person who actually managed to make me laugh more in five minutes than I did throughout my whole three-month trip around the world (fact).

Thank you for always encouraging me to pursue my dreams and believing in me more than anyone ever has, besides my parents.

Thank you for not hating me when I left.

Thank you for all the little things you do — you know what they are, and they are far too numerous to list here.

Thank you for the flowers. I still don’t expect them, ever.

It’s not our anniversary (which I guess is Halloween?!) or Valentine’s Day or his birthday. I’m just writing this because he makes me so very happy.

And because Robin asked.

And because it’s Friday.

Thrilled to be back on The Ali On the Run Show today—this time as guest host for an Ask Ali episode!⁣
Summer is here, marathon training is in full swing, and my forehead vein is here for it all!⁣
I was lucky to spend Mother’s Day with my mom. We did our traditional celebration of shopping and having lunch together, and although it looked different from previous years—I helped her with everything from walking to using the restroom to loading up her fork with each bite of salad—we had a nice day together. Still, that night, I cried so hard and couldn’t shake my sadness.⁣
Lovely five miles with Steph this morning! Doing my best to ramp up my running again with only four weeks until marathon training starts. 😬⁣
Happy spring! Feels like a good time to emerge from my winter IG hibernation. 😄⁣
Through all the coldest miles of marathon training, I visualized what was to come after I crossed the finish line: a long-awaited family trip to Oahu. Warm sunshine, salty beach days, frosty drinks by the pool. An escape from wintery weather and worries at home. Lots of time together making memories.⁣