OK, so this long run wasn’t a race, but I did it 6 sec/mile faster than my half-marathon PR pace, so… yeah. That’s pretty much a race to me.

But I knew what I was getting into when I decided to run with Meg. 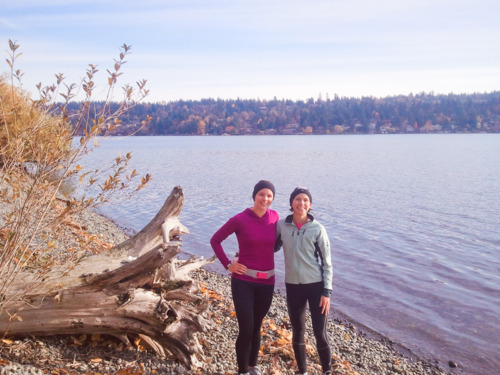 You may recall that Meg ran most of a 16-miler with me in October, and even though she’s fast (see: Oiselle running team; 3:40 pacer at next weekend’s Seattle Marathon), at that time she slowed down to run at my 9:40-ish pace.

Today? Not so much. 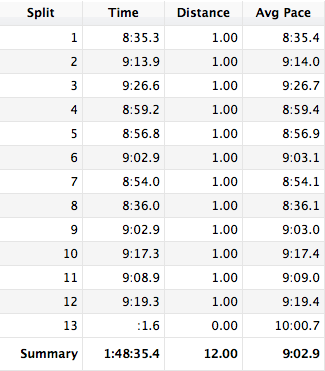 I met up with Meg, her husband John and a bunch of their friends in the Central District for bRUNch, which is a lovely tradition of theirs that’s exactly what it sounds like. Running and food? I’m there.

We started off fast, although I’m not sure how fast exactly, since my Garmin couldn’t get a signal for the first half-mile. (I ended up running an extra half-mile at the end to get my Garmin to 12 miles… OCD much?)

At my kind request (panting, gasping, dying), Meg and I moved toward the back of the pack and slowed down a bit. The rest of the group only wanted to run 6 or 7 miles, so people began peeling off in small groups to head back to the house for food. Eventually only Meg, John and I remained and we ran along Lake Washington Boulevard to Seward Park, which is just about the most beautiful run you can do in Seattle.

We discussed my marathon strategy, since Meg is convinced I can go faster than I think — hence why she pushed me on this run — and I liked her idea of running conservatively/comfortably for the first half and then trying to drop a few seconds per mile after that. Doable, maybe? Let’s not forget that the entire second half of the race is on the Las Vegas strip and I’ll be pumped out of my mind to be running a marathon.

I’m happy to say that I kept up pretty well during this run, even though we ran much faster than I normally would for this distance. I felt good and only worried about tiring out my legs. The end, though, was full of tragic uphill running:

I definitely earned the massive bagel with cream cheese I enjoyed shortly after.

This run exhausted me way more than my 20-miler last weekend! After 20 I didn’t nap at all… today I napped for three hours. Yum.

My last double-digit run of marathon training is now done. I can’t believe one of my runs this week is only 3 miles! The last time I ran “just” 3 miles was October 5. Ha!

Two weeks from right this second I’ll be in the midst of Stripping at Night. Home stretch, baby.