Tonight’s stupid-fast run is brought to you by blind rage: 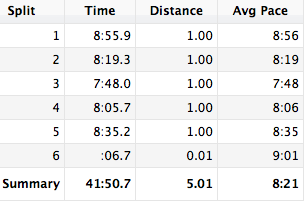 I should have done an easy run to recover from my 22-miler, but I had so much adrenaline pumping through me due to anger and frustration that this run felt effortless.

Seriously. I was a gazelle. I was a mermaid. I did not feel my legs. I just ran.

Without getting into details, there is someone on our block who is breaking the law and causing major safety concerns. We (and many of our neighbors) have the police on speed dial and have called in many, many reports over the past several months.

Today, while walking home from the bus stop, I saw something that caused me to call the police again, and I became extremely frustrated by what I perceive as lack of urgency/downright apathy on their part. Nothing is being done, and I feel like it will take someone actually getting hurt in order to elicit any helpful response from the police.

It felt good to fly tonight. I’m pretty sure I need to get a massage after every long run (ha! I wish), because I had zero soreness after the 22 miles + 90-minute massage extravaganza on Sunday — just some creakiness in my knees when walking up and down stairs.

I will take it easy during tomorrow’s run. Tonight, I just needed to crush some miles because I needed to feel like I was at least in control of something.