The Hood to Coast relay is this Friday and Saturday, but the runners on Nuun’s three teams — Watermelon, Lemonade, and Cherry Limeade — are arriving in Seattle TODAY!!! 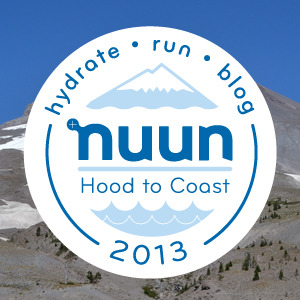 I’m runner #12 of 12 on team Watermelon, which means I get to run across the finish line on the beach in Seaside, Oregon! That makes me The Closer, according to this t-shirt:

“This is it — the last leg. If you want to keep going after this, you’re going to have to swim with the sharks. What awaits this runner? An easy three in Portland, an idyllic five along the Nehalem River in Mist (NOT from the German, BTW), and a sinuous downhill into Seaside and onto the beach for the big finish. Cue the showers of glory and warm leftover energy drink.”

I’m. SO. Excited! I painted my damn nails and everything. 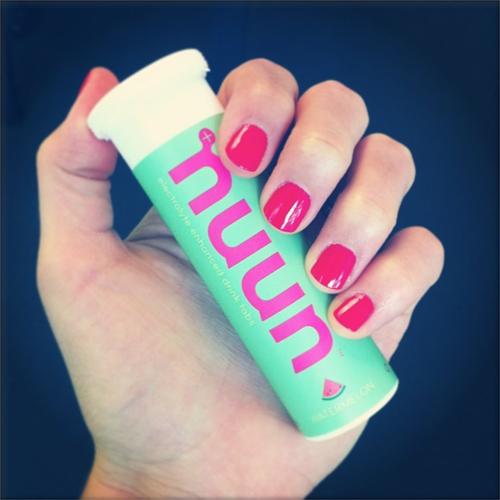 Here are the combined stats of the three legs of the relay that I’ll run:

That’s right, kids: I get to run the easiest legs of the race AND experience the glory of crossing the finish line on my final leg!

Originally, my three legs added up to just over 16 miles and my mileage/difficulty ratings were more middle-of-the-pack, but my first exchange had to be rerouted due to construction in Portland and runner #1 took on those three miles.

I ain’t mad. I didn’t go out of my way to choose the easiest position — it just happened to transpire that way — so I will take it and enjoy it! 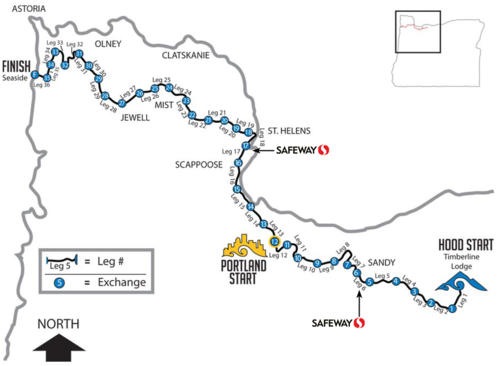 Here’s a closer look at ‘em:

3.07 miles — rated “easy.” Mostly flat with a few rolling hills, trail and paved city streets. My predicted start time is between 9:45 p.m. on Friday (based on HTC’s calculations using my teammates’ 10K pace). A nice, short run to kick things off!

4.92 miles — rated “easy.” Flat terrain along the Nehalem River and through pastoral setting on Hwy 47 and Hwy 202. My predicted start time is 7:17 a.m. on Saturday. Sounds pretty peaceful and uneventful!

5.23 miles — rated “moderate.” Challenging and steep downhills on winding paved roads to finish on sand. My predicted start time is 4:15 p.m. on Saturday. This will be the most difficult leg physically, but also because I’ll be exhausted! I imagine I’ll be on that crazy endorphin high that you get when you haven’t slept but are doing something so awesome that it doesn’t even matter.

Tonight after work, I’ll meet up with all the ladies who have arrived so far and start getting to know them! I’m taking Thursday off so I can participate in all the activities Nuun has planned for us, including a visit to the Oiselle headquarters, an easy run around Green Lake, riding the Duck (which I’ve always wanted to do!!), decorating our vans, and more.

Psst… I’m WAY more nervous about meeting the other runners than I am about running the race! I’m sure everybody will be lovely and we’ll have tons of fun, but it feels like the first day of school! 🙂

I’ll be posting Tumblr updates as I can, but I’ll just have my phone — no laptop — so extensive recaps won’t happen until after the race. I’ll be tweeting up a storm (@devonamills) and Instagramming my face off (devonamills), so feel free to follow along there, too!