I’ve just been lazy about blogging this week. Here’s what went down… 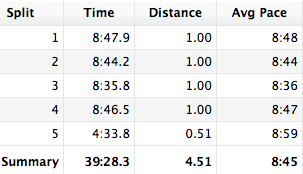 I got my 4.5 miles in relatively quickly so I could make it home in time for The Bachelor!

Aaron decided to do the same exact run, but going the opposite way around Green Lake, and he did it in 33 minutes. I kind of hate him for being such a fast runner, but I really enjoyed it when we passed each other partway through the run and said “oh haiiiiiii!”

I lifted weights; nothing exciting! And then, again, watched two hours of The Bachelor. Not only did I dedicate FOUR HOURS of my life to that show this week, but it aired from 9:00-11:00 versus the usual 8:00-10:00, so I was tired and grumpy and snacky the next day. Hrmph.

I was tired and grumpy, as I mentioned, so I ate everything delicious and terrible for me in the office and felt even worse by the end of the day. Plus, it was raining. Hard. I just did not care, and called it a rest day. I also made sure to get in bed by 10:00!

It was a sunny day and a clear night (WIN WIN WIN), so I did the speed workout that I had skipped on Wednesday: 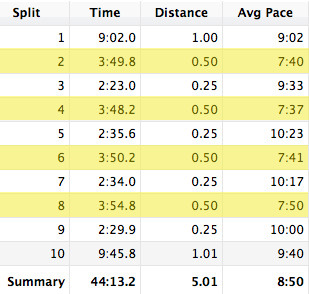 I always aim to run my speed intervals in less than 3:55, so I succeeded, but just barely on the last one. I was hurting. That’s what I get for screwing with my routine and slacking off a bit.

Hey, look, we’re all caught up to the present! Today is a rest day, and Aaron and I are going out to dinner at a restaurant that has croquettes filled with molten peanut butter on the menu. They are served with jelly for dipping. UM YES.

And tomorrow, I have my 10-mile long run. Wooooo, double digits! We meet again…