This was the coldest run I’ve ever done. Aaron was off with his team at 9 a.m., and I set out shortly after. It took about a mile and a quarter before I could feel my toes again and I stopped being concerned about my nose becoming frostbitten.

I really, really tried to slow down for this run; general wisdom is that long runs should be done at an easy pace that allows you to talk with a friend. My aim was a 9:30 average pace. It was wayyy too cold for that, though, and I had to go faster just to keep warm! 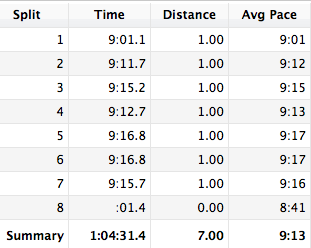 Every breath was a struggle because the air was… this is going to sound stupid… so heavy with coldness. It’s just science, folks.

The scenery was beautiful, though. This is the same trail on which I ran my half-marathon PR (in blazing heat rather than freezing cold!). 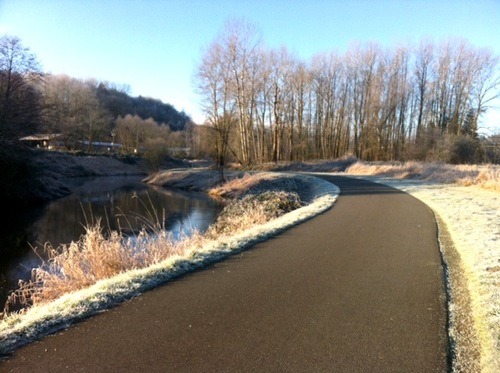 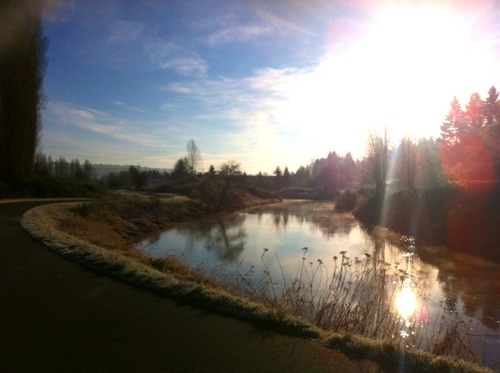 About five minutes after I got to the finish line of the bike ride, I was surprised to see Aaron pull in with his team since I wasn’t expecting him for another hour at least. Turns out they just did one loop of the course because it was too stinkin’ cold to do the extra loop.

It wasn’t a timed race — more like a fun ride — but the Audi guys were the first cyclists I saw at the finish line, so I guess they… “won”? Heh.

Both Aaron and I are heading for warmer temps soon, thank goodness, although not together. I’ll be in Palm Springs Thursday through Saturday for my company’s annual meeting, so I’ll get to do my 8-mile long run in the warm sunshine! I might even wear SHORTS! 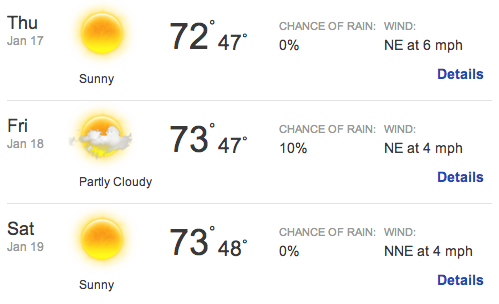 And Aaron is going to Maui the following week for a cycling retreat with his team.

Through all the coldest miles of marathon training, I visualized what was to come after I crossed the finish line: a long-awaited family trip to Oahu. Warm sunshine, salty beach days, frosty drinks by the pool. An escape from wintery weather and worries at home. Lots of time together making memories.⁣
CIM delivered today in a big way! 🎉⁣
I’m so excited to run across this finish line tomorrow!!! 🎉⁣
My running story wouldn’t exist without my mom.⁣
Hiiiii, I’m running a marathon this week!!! 🎉⁣
Can you spot the last little red leaf hanging on in this pic? 🍁 Fall is nearly over. Winter is coming. And we’re only a week and a half away from @runcim262!⁣