On Thursday, my team of about 25 people left work at 12:30 to go rock climbing at Vertical World. I’ve been meaning to try rock climbing for years, but just never made the time or effort, so I was pumped!

The equipment is fairly basic — a simple harness and special shoes — so I was ready to go in just a few minutes, and I found myself staring up at the beginner-level walls. Oh, hmm… this is when I got a little nervous. 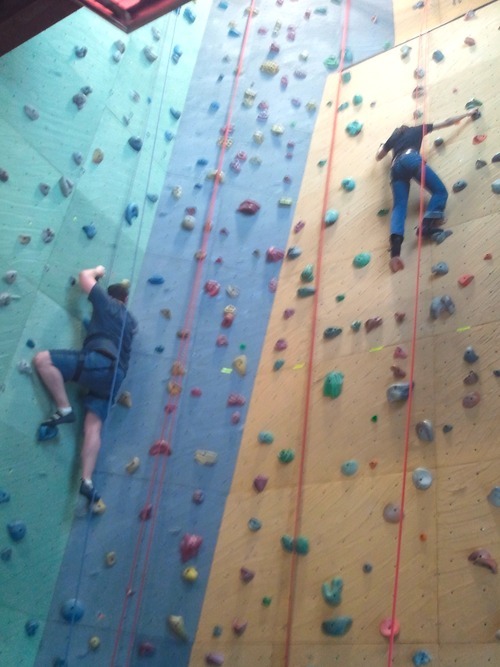 I watched several of my co-workers climb first, just so I could get an idea of what I was getting into, and then finally it was my turn. I took on the yellow section above, which I think was the easiest route in the whole place (a 5.3, for you climbers).

The trick, apparently, is to climb with your legs first, and just use your arms to steady yourself. Since 99.9% of my body strength is in my legs, I had a ball. I climbed up to the ledge of the yellow wall, then climbed up on the ledge, and then made the mistake of looking down. Um, yeah, time to rappel back down ASAP!

Perhaps the belayer was just being nice, but when I reached the ground, he was all, “Nice job! You made that look easy. Go try something harder.”

Well, you don’t have to tell me twice. 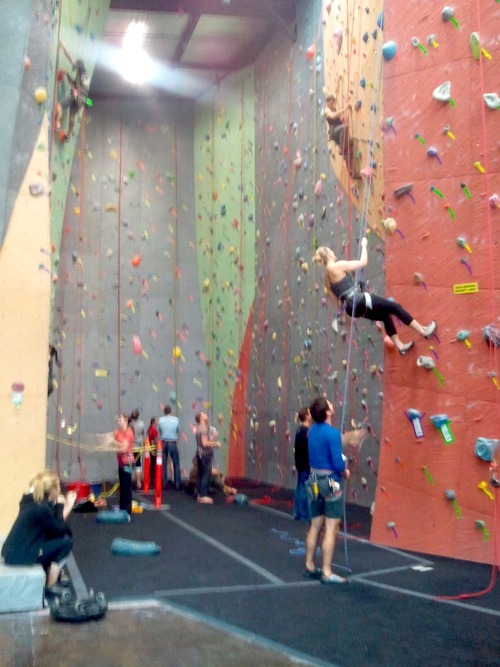 I walked around to see what everyone else was up to, and found my boss’ boss (blue shirt) belaying my boss (gray tank). They are both avid climbers and did really impressive things on the more difficult routes.

I also found some totally crazy-looking walls with holds that went onto the ceiling. Whaaaaat? 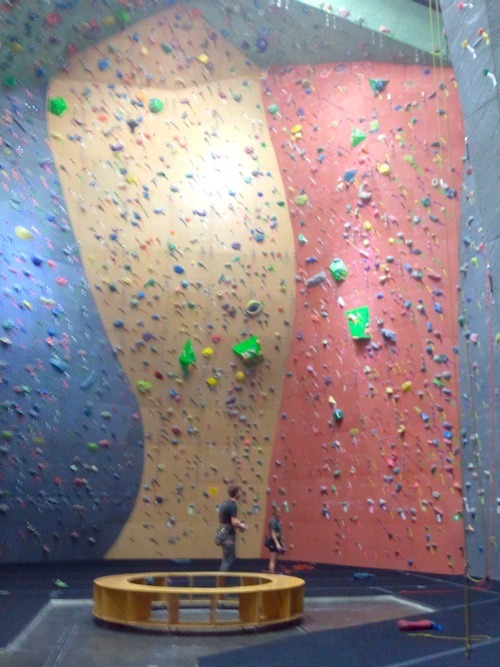 And I wound up climbing five more routes, I think, including a 5.7 and two 5.8s!

No action shots of me climbing; just a bathroom pic instead (naturally). 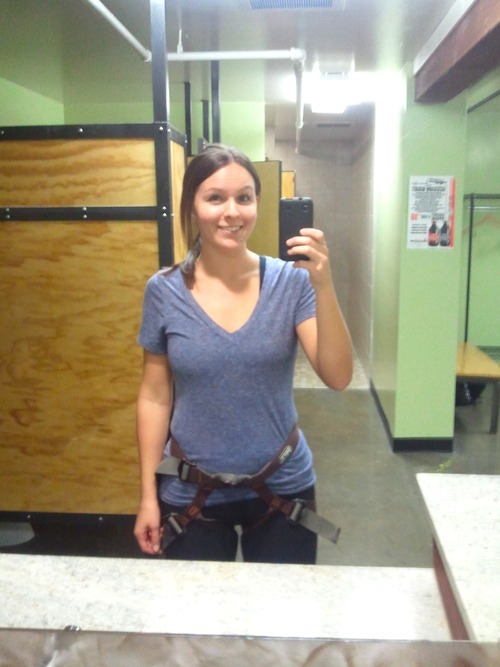 I really, really, really enjoyed my first climbing experience, and I can see how climbing could become an addiction! It was a lot more of a workout than I expected — I was sweating as I reached the top of every route — and I loved being challenged, having to problem-solve, and having to gather the courage to take risks with my holds on the way up.

Just like running, it takes a lot of determination to reach the finish in climbing, and it is oh-so-satisfying to get there.

Had a blast holding down the Garcia aid station at the @runsuperseries Cascade Super Ultra this weekend!⁣
Happy first day of fall to all and happy first post-marathon run to me!⁣ 🍁
Survived the Cascade Express Marathon! 🎉⁣⁣
I guess I’m running a marathon tomorrow!?⁣
It’s been a week, but nothing a nice sunny long run with these views can’t fix.⁣
Can’t wait to get back out on the paddleboard with Wally once we’re both fully healed! ⁣