Unlike the nightmare of getting to the start line of the Lake Sammamish Half, it took us exactly seven minutes to drive on nearly car-less streets to Gas Works Park and easily find a spot in the regular parking lot for Seattle’s Best 15K. Huzzah!

I had plenty of time to hang out in the car, eat a Clif Bar, use the restroom, and decide I definitely needed to wear arm-warmers for the 7:30 a.m. start. Brrrr. 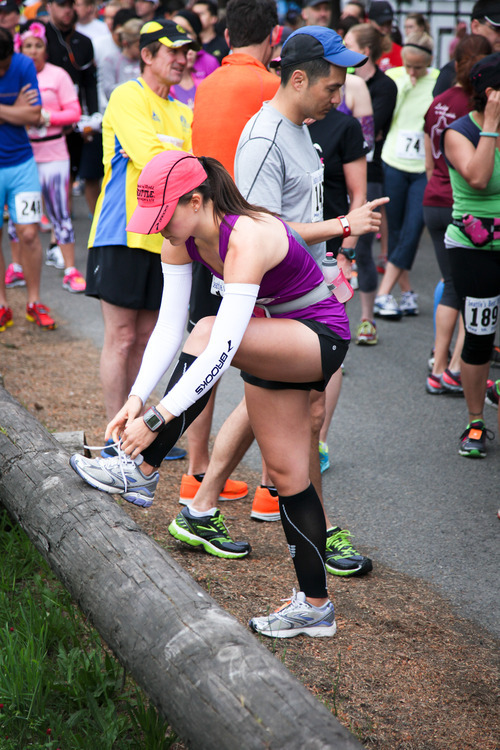 I wore my trusty Brooks Ghost 4 shoes with brand-spankin’-new (as in, made the night before) custom inserts from Road Runner Sports, hoping they would help my shoes feel better than they had in the last few weeks. They didn’t disappoint! 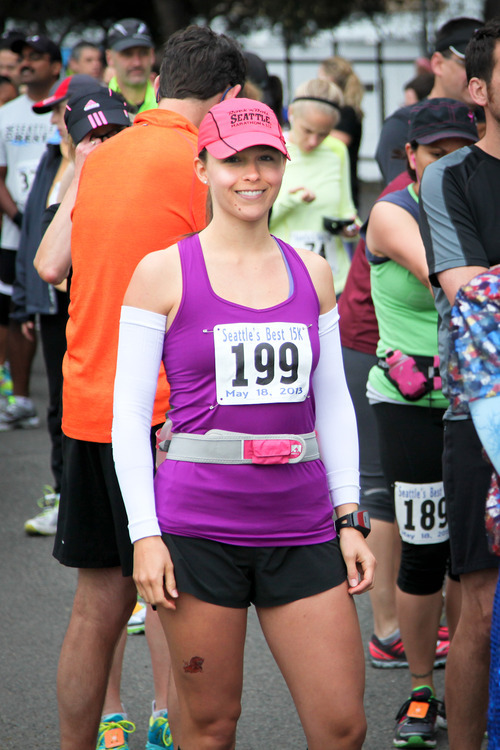 What’s that on my quad, you ask? Why, a temporary tattoo of a lion leaping through flames, of course. 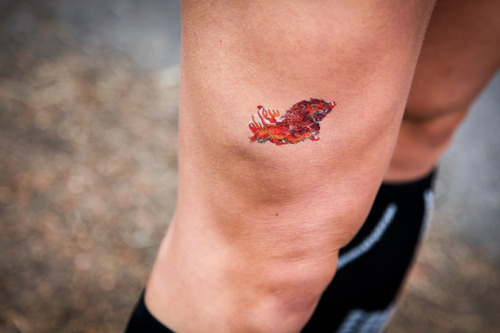 I picked it up at a restaurant last weekend and thought it was kind of hilarious. And fierce. Rawr. 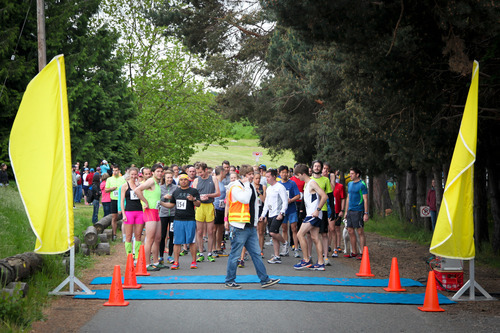 There were no official corrals; a man with a bullhorn just asked us to organize ourselves by pace. He had everyone who planned to run sub-7:00 miles go in front, followed by the sub-8:00 milers, and so on.

I jumped in near the back of the sub-8:00 milers, and it felt weird to be so close to the front of the pack. Then again… small race.

Soon enough, we were off! 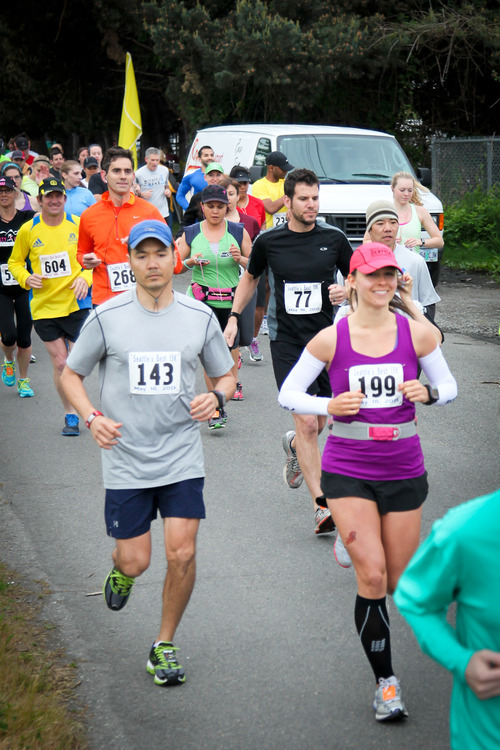 I was worried about starting off too quickly since I knew I was surrounded by speedy people, but my legs and lungs felt great in the first mile (8:06). I realized I kind of, sort of, maybe belonged with these people. 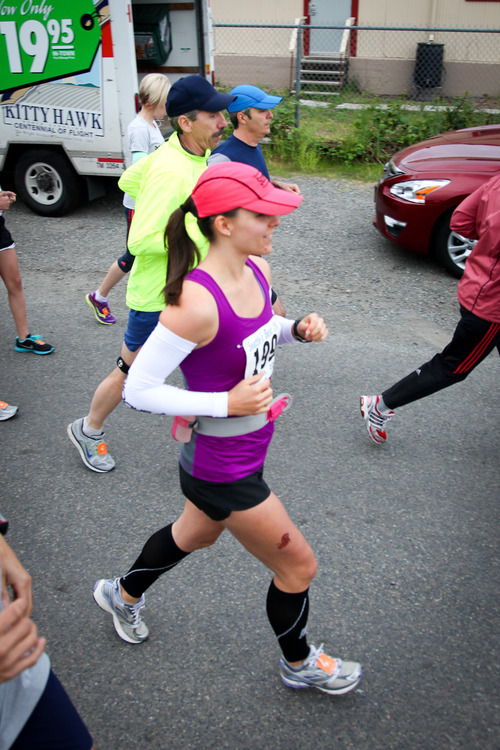 I do enjoy a nice power-walk.

Aaron did an incredible job driving around and meeting me at various parts of the course. I saw him four times! By the fourth time, I threw my hands up in the air, like, “How the eff did you get here so quickly??” Black magic. 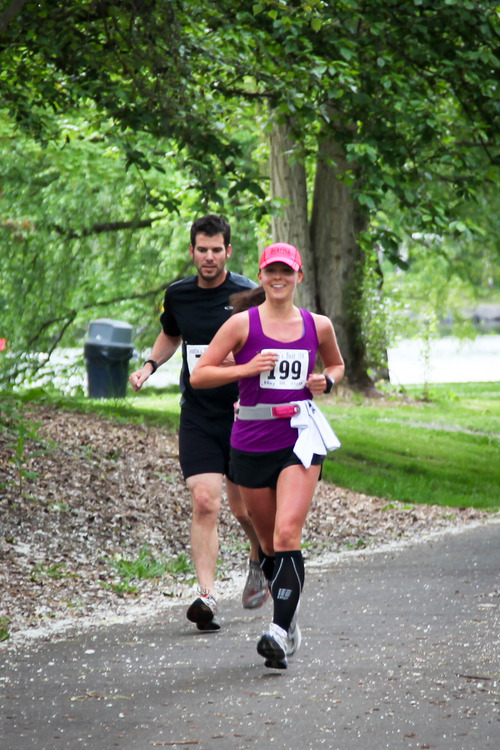 This part of the race was an out-and-back along the Ship Canal. I remember haaaaating this part two years ago, since it lasts a few miles, and then you still have all of Lake Union to run around.

This year, I just appreciated how nice and flat and straight it was — easy-peasy stuff to take me through miles three and four (8:06, 8:10).

Then, I realized mayyyybe I’d gone out a little too fast. My legs were starting to feel a wee bit tired. Nothing crazy, but I knew I’d need them to be strong for a few hills later on.

I ate my chocolate Clif Shot at mile 4.5 (I brought it and two bottles of Nuun in my fuel belt so I could skip the aid stations), and slowed down for miles five and six (8:17, 8:17 <— completely accidental consistency).

I saw Aaron again in mile seven (8:09) on Fairview Avenue and sped around that guy in the gray shirt so Aaron could get an unobstructed photo. Hey, I’ll take motivation in any form! 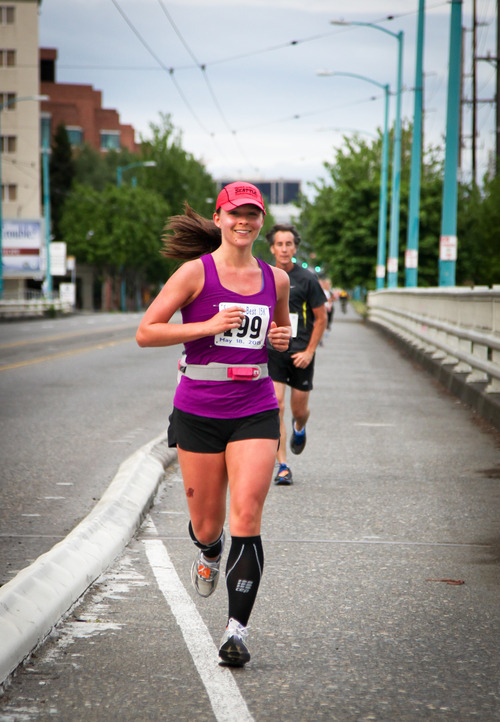 This is where things started to get tough. The small-to-begin-with crowd of runners had thinned out loooong ago, so I was pretty much running by myself with only one or two people in my sights ahead of me. It was weird to not have other runners from whom I could glean some energy.

Also, mile eight (8:42) brought a few hills. We had to work our way from Fairview Avenue up to Eastlake Avenue in order to cross the University Bridge, and that involved some short, steep hills.

At one point we went up a steep hill only to go down again (which I did verrrrry slowly because I didn’t want to slip and fall on loose gravel; it was that steep) and then go up again. I felt like this up-and-down nonsense was entirely preventable with just a slight course change, so I was all like, what in the actual f*ck!

The positive part was that I passed a few people who really had trouble with the uphills, which I just attacked without a second thought (not that they didn’t hurt, but I wasn’t afraid of them). Thank you, hill repeats. And flaming-lion tattoo.

I picked things back up for the last full mile (8:16), as one does, but I felt so much slower than that. I was really feeling tired and ready to be done.

I’m super-proud of my last 0.3-mile kick at 7:37 pace. There was no one right ahead of me and no one very close behind me for the finish, so I got some nice cheers just for me and the announcer even said my name! (He pronounced it wrong by saying Dev-ON instead of Dev-IN, but I do realize it’s spelled Dev-ON, so I’ll forgive him.)

A smile for Aaron before the finish. 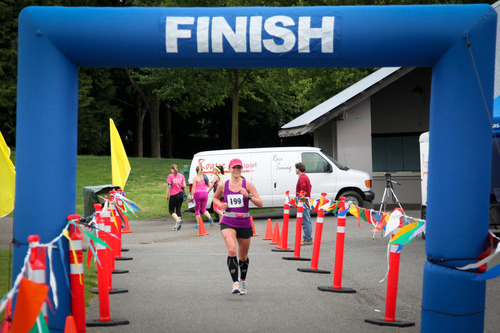 And a hand over my heart for Boston. 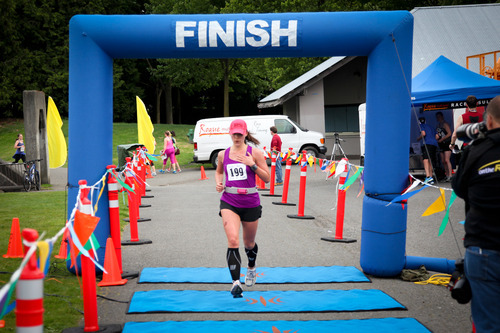 Plus, the WORST part of ANY race — when they make you stand still to cut off your timing chip when you really just want to flop onto the grass. 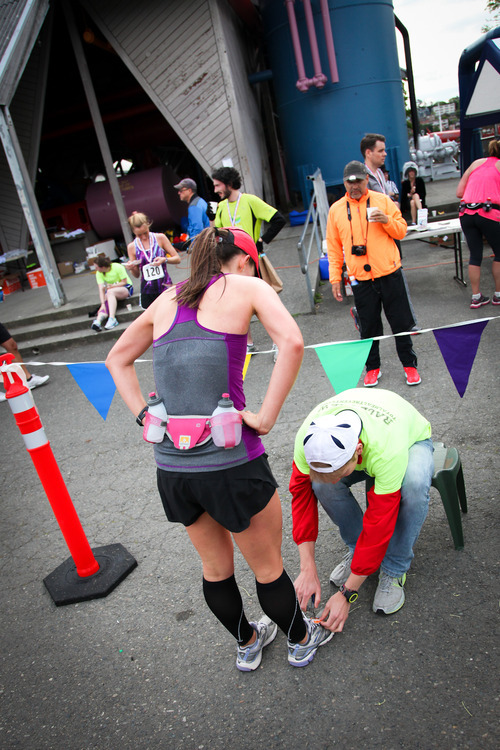 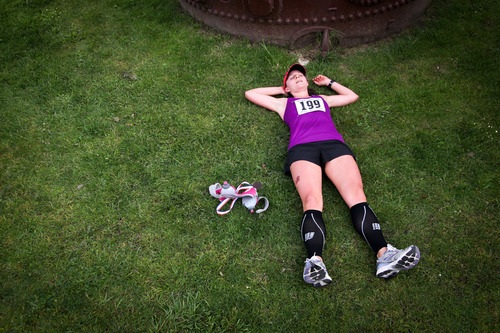 I eventually came back to life and actually put on my medal. Wheee! 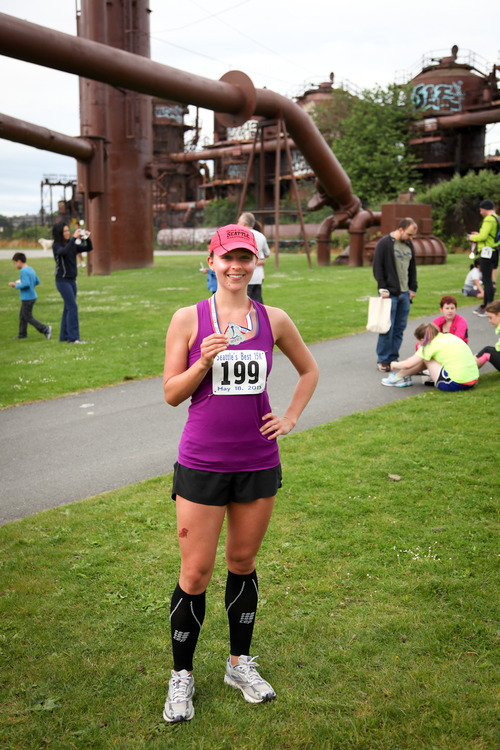 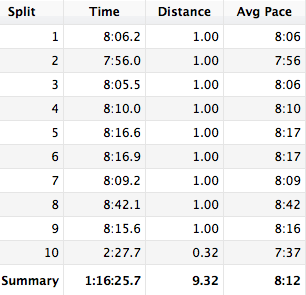 Overall, this was a great race and I’m proud of my time! I really, really wanted to run at least one sub-8:00 mile (although it was probably not ideal to do that in mile two), and I PR’d by just under seven minutes.

Plus, I ran 10 more miles afterward at a very decent clip. Even though I’m training for a marathon, and running 19 miles in one day is kind of standard, that sh*% is still crazy.

Perhaps I should change my blog tagline to, “Just crazy enough.”

I’m extremely proud of this race! I started off pretty fast, and even clocked 7:56 for mile two, but slowed down a bit after that. Still, I held a challenging pace, attacked the hills in mile 8, and passed quite a few people in the final stretch.

And I finished strong, with my hand over my heart for Boston.

(How many letters do I get?)

F goal: Finish with a smile!

99 Problems will be stuck in my head the whole time. The Hugo version is better. If you’ve never heard it before, YOU ARE WELCOME.